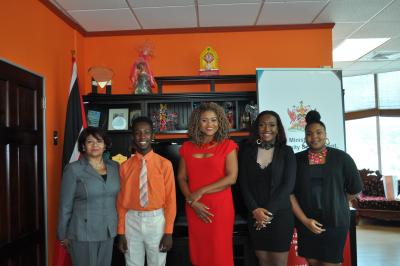 Three young people, Ms. Aaleeah Moses, Mr. Joshua Hinds and Ms. Hameadah Caesar, who have all excelled in the field of Culture, paid a courtesy call on Culture Minister, Dr. the Honourable Nyan Gadsby-Dolly, on Tuesday 5th November, 2019 at her office, Level 20, Nicholas Tower, 63-65 Independence Square, Port of Spain.  These young people, ages 16, 17 and 20 years old respectively, were recently recognized by the Committee for Education and Youth Development chaired by Deputy Mayor of San Fernando, Ms. Vidya Mungal-Bissessar for their outstanding achievements in the category of Culture.

Minister Gadsby-Dolly welcomed the young cultural ambassadors and shared that "It is great to see young people making positive strides especially in the realm of culture.  This is truly a source of inspiration and it is great when we can lift them up by acknowledging their work so that they can also encourage other young people like themselves. Culture impacts the soul and helps with one’s all round development.” Minister Gadsby-Dolly also congratulated the San Fernando Corporation for recognizing their dedication and hard work.

Deputy Mayor Ms. Vidya Mungal-Bissessar expressed her amazement at the accolades of these young individuals and what they have accomplished thus far. Hameadah is a former participant of the Prime Minister’s Best Village Trophy Competition as well as a former Miss La Reine Rive competitor. Aaleeah, a Form 4 student, is involved in her school’s folk group where she participates in dance, singing and playing drums while Joshua, a Form 6 student is an accomplished musician; he plays the steelpan, piano, African drums and reads and writes music.

The Ministry of Community Development, Culture and the Art congratulates these three young people on their achievement.