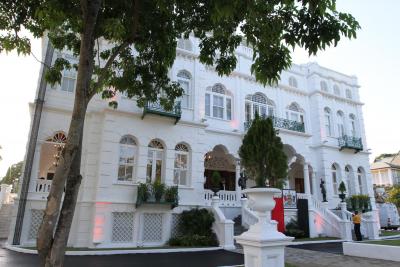 Whitehall has been officially reopened.

The newly refurbished building will house the Office of the Prime Minister.

Following the collapse of the cocoa industry the property, which was originally owned by a wealthy cocoa family, was sold to American businessman Robert Henderson. Whitehall was then given its name after the coral stone from which it was built.

By the beginning of the Second World War, Whitehall had been commandeered to be used as security headquarters. It was later used as a cultural centre by the British Council, as well as to house the Trinidad Central Library, Regional Library, National Archives, the Trinidad Art Society and the Government Broadcasting Unit.

In October 1954, it was formerly purchased by the Government of Trinidad and Tobago. Restoration work was completed in 2000 and was occupied by the Office of the Prime Minister until 2009.

Whitehall holds an integral place in the historical record of Trinidad and Tobago, having been central to several key events including the country’s role in the World War II.

UDeCOTT was  mandated to do further restoration works and outfitting upgrades on Whitehall and the Mews buildings located at the rear of the property including construction and outfitting of a reception and service building and resident staff facility, internal building works, external works, specialty works such as architectural refurbishment, roofing works and landscaping.