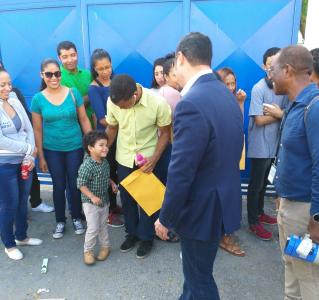 The Venezuelan Migrant Registration Process is logistically sound but the Ministry of National Security is always trying to improve the process.

Minister of National Security, Communications and Minister in the Office of the Prime Minister, the Honourable Stuart Young gave this assurance following a walk-through of the Registration Centre at the Queen’s Park Oval earlier today.

He said not because the Government is trying to improve the system, means it is flawed.

“It doesn’t make sense coming and telling you a figure today and it changes tomorrow. As the process continues we are going to have changes … the Chief Immigration Officer made certain recommendations to make people more comfortable. I’ve spoken to the Permanent Secretary from the Ministry of National Secretary and said let’s try to facilitate that.”

Minister Young returned to Trinidad yesterday, June 5, 2019 following a 10-day trip with the Prime Minister, other Ministers of Government and President of the National Gas Company. While at the Registration Centre he greeted migrants whom he told that the Government is doing all it can to ensure the registration process is humane.

He explained that he requested that daily registration numbers not be released but he committed to providing the public with the final figure, which will include a breakdown, and the cost of the registration process, once registration ends.

He said many have asked what happens after the one-year period expires but a responsible Government must put a timeline in place. This, he said, does not mean that timeline is absolute. Nevertheless it is premature at this stage, to predict what will happen in a year’s time, he said.

“I am also quite certain that once things settle down in Venezuela, the vast majority will return. As we have said repeatedly, we are going to be measuring this… and when we’re coming down to the year we will see what’s happening.”

Minister Young reiterated that the process will be closed on June 14, 2019 as previously announced and the law will revert on June 15, 2019.

Earlier in the walk-through, he appealed to the migrants present, to encourage other Venezuelans in Trinidad and Tobago to come forward to register. He warned them against committing crimes while in this country.

He said Venezuelans who are in the Immigration Detention Centre (IDC) for overstaying or not having their documents will be allowed to participate in the registration process. However, those who committed criminal acts will be dealt with differently.

He thanked all state agencies and volunteers involved in the Venezuelan Migrant Registration Process who are working long hours to continue to make it a success.