TTFA receives over $3M from MSYA 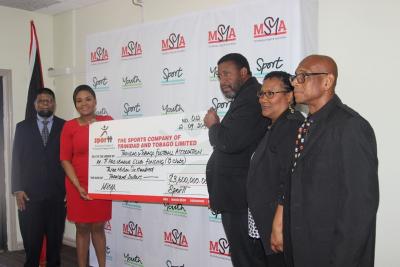 Minister of Sport and Youth Affairs, the Honourable Shamfa Cudjoe, along with officials of the Ministry of Sport and Youth Affairs and the Sport Company of Trinidad and Tobago, met with representatives of the Trinidad and Tobago Football Association (TTFA) today, to present a cheque valued at TT 3.6 Million dollars, for funding of the eight (8) clubs scheduled to participate in the 2019 Trinidad and Tobago Pro League.
Last year, Cabinet made a decision to provide funding to football clubs participating in the TT Pro League for a period of three (3) years. These clubs are Central FC, Calendonia AIA FC, W Connection FC, Pt Fortin FC, Club Sando FC, Terminex Rangers, North East Stars FC and San Juan Jabloteh FC.
During the meeting, Minister Cudjoe stated that football is very powerful tool for youth development in communities and provides many avenues for personal and professional growth. She urged the football fraternity to focus on creating opportunities for our nation’s youth and reminded the TTFA to ensure that clubs are compliant and players are paid outstanding monies due from previous Pro League seasons. She stated that all stakeholders must work diligently to restore confidence in the sport and trust in the football fraternity.
Prior to receiving the cheque, Mr. David John-Williams, President of the Trinidad and Tobago Football Association, expressed sincere appreciation by thanking the Minister and the Government, by extension, for supporting and investing in football.
The Ministry of Sport and Youth Affairs remains committed to the development sport in Trinidad and Tobago, and extends best wishes for a successful TT Pro League 2019.
11th Confirmed COVID-19 Delta Case for Trinidad and Tobago
Trinidad and Tobago COVID-19 (Novel Coronavirus) Update #855
Update on COVID-19 Vaccination for the Pregnant and Breastfeeding Populations in Trinidad and Tobago
Service Youth Clubs Benefit from MYDNS Training
Trinidad and Tobago COVID-19 (Novel Coronavirus) Update #854