TTDF in the Bahamas providing aid 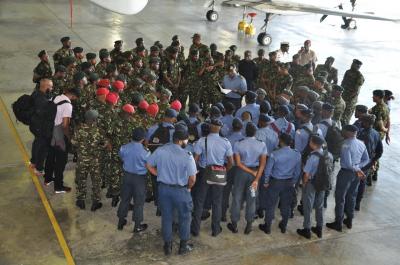 The Trinidad and Tobago contingent were met by the Bahamian Minister of National Security, the Honourable Marvin H. Dames and Chief of Defence Staff of the Royal Bahamas Defence Force, Commodore Tellis Bethel and Senior RBDF officials at the Airport in Lynden Pindling International Airport.

There was a short press conference and then briefs on the current state of the two most affected islands in Bahamas.

The TTDF trops will be in the Bahamas for one month on the first instance to provide humanitarian aid, disaster relief efforts and internal security on the affected islands.

The TTDF troops were given their final briefs by CDS Air Commodore Darryl Daniel and other senior Officers at the Trinidad and Tobago Air Guard Base at Ulric Cross Air Station before heading to the Piarco airport to board the flight to Bahamas.

They were addressed at the airport by the Minister of National Security who thanked all men and women of the TTDF for their service and offered words of encouragement as they embarked on their mission.