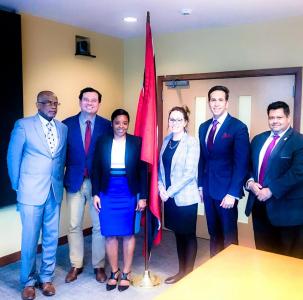 Every four years via the Mutual Evaluation Mechanism (MESICIC) under the Inter- American Convention Against Corruption, Trinidad and Tobago is reviewed by lead experts from the Organization of American States (OAS) to gather information on the implementation of the convention in our country. This year Trinidad and Tobago underwent such an evaluation through a series of meetings that were held from April 1-4, 2019 with the Attorney General and Minister of Legal Affairs, the Honourable Faris Al-Rawi, key stakeholders from the AGLA International Law and Human Rights Unit (ILHRU) led by Director Ian Rampersad, Government Ministries and Civil society.

The Inter-American Convention against Corruption (IACC) is a treaty by which the 34 Organization of American States (OAS) Member States have undertaken to work together to fight corruption and take specific decisions to that end. Adopting a comprehensive approach, the Convention envisages measures for the prevention, detection, investigation, and punishment of acts of corruption as well as for the recovery of corruption proceeds.

Trinidad and Tobago ratified the Convention April 27, 1998 and became a State Party to the MESICIC since June 4, 2001.

The AGLA thanks all stakeholders that participated in this initiative.

Minister of Health visits airport to observe Infectious Disease Protocols
Minister Young urges police graduates to protect the independence of the Police Service and to serve with pride and integrity
The Heritage site, the Red House returns to its glory
“Master of Carnival” returns to NAPA
Tourism Minister: Coronavirus precautions in place as visitors arrive