T&T to host 2019 Board of Governors regional meeting 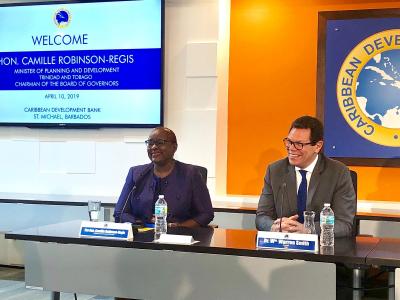 The Honourable Camille Robinson-Regis, Minister of Planning and Development is confirming that the Government of Trinidad and Tobago will host regional Heads of Government, Ministers of Finance, regional businesses and other Governors and Directors of the Caribbean Development Bank (CDB) at the Bank’s 49th Annual Board of Governors Meeting on June 5-6, 2019. Approximately 400 delegates, including Government Ministers and officials, development partners, private sector representatives, members of civil society, academia, and media are expected to attend the meeting which will focus on the buzzword ‘Transformation’.

According to CDB President, Dr. William Warren Smith, transformation is a priority for the region as a whole as well as for the Bank as it approaches its 50th anniversary year.

“Our borrowing member countries are operating in an increasingly complex global environment. The challenges are new, different and becoming increasingly complex relative to what obtained when the Bank was founded in 1970.  As a region and as an institution we need to, not just keep up but actually use innovation as a vehicle to leap ahead in this changing world. That is what we are anticipating in Trinidad and Tobago – a rich exchange of ideas, approaches and innovation that places the region’s development at the forefront. We extend our thanks to the Government and people of Trinidad and Tobago for hosting this important meeting,” said Dr. Smith.

In her capacity as Chairman Elect of the Board of Governors for the 49th Annual Meeting, Minister Robinson-Regis echoed the President’s sentiments stating that this is also a year of transformation for Trinidad and Tobago as we are emerging from a period of recession and all of the efforts over the past three years to transform the economy in terms of the creative sector, agriculture, climate change and trade are coming to a head, and the CDB has also projected economic growth at an average rate of 2% for 2019 for Trinidad and Tobago.

The Planning Minister was invited by the CDB to undertake an official visit to the Bank’s Headquarters in Barbados on April 10, 2019. There she met with CDB President, Dr. William Warren Smith and other members of senior management. The official visit served to discuss matters of mutual interest between the Bank and Trinidad and Tobago. It also provided an opportunity to update the bank on the plans for the upcoming Annual Meeting which are being undertaken by the Ministry of Planning and Development.