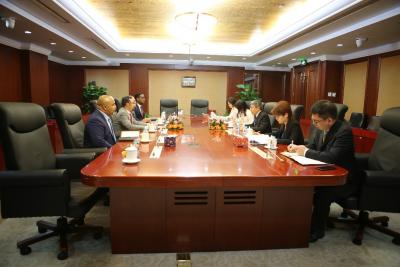 On April 25, 2019 Minister Moses delivered a statement at the thematic forum on “Policy Connectivity” at the BRF, where he highlighted the importance of consultation among stakeholders and knowledge sharing to the success of the BRI. Minister Young participated in the thematic forum on the “Clean Silk Road” which focused on promoting transparency and implementing anti-corruption measures in BRI projects.

On April 26, 2019, Minister Moses led bilateral discussions with State Councillor Wang Yi, Minister of Foreign Affairs of the People’s Republic of China. The Foreign Ministers reflected positively on the state of Trinidad and Tobago-China bilateral relations and discussed opportunities for closer cooperation at both the bilateral and multilateral levels.

Minister Moses reaffirmed Trinidad and Tobago’s long-standing friendship with the People’s Republic of China, noting that both sides will celebrate 45 years since the establishment of their diplomatic relations on June 20, 2019.

Prior to the opening of the BRF (on April 24, 2019), Minister Young led discussions with the Export-Import Bank of China (China EximBank) and the China International Development Cooperation Agency (CIDCA) on the development of current projects in Trinidad and Tobago such as the Phoenix Park Industrial Estate. He also met with stakeholders to pursue new opportunities in the areas of energy, finance and banking, national security, and infrastructure cooperation.

On April 27, 2019, Minister Moses conducted a working visit to Zhengzhou, Henan Province, where he met with local government representatives and explored cooperation opportunities. He then returned to Beijing on April 28, 2019 to attend the Official Opening of the Beijing Expo 2019. Over the period April 29 to October 07, 2019, Trinidad and Tobago will participate in the Expo via a joint CARICOM Pavilion.