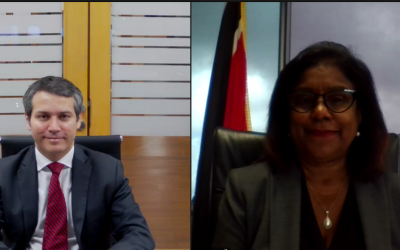 17 Aug, 2021: Trinidad and Tobago and Chile commenced the First Round of Negotiations for the Partial Scope Trade Agreement between the Republic of Trinidad & Tobago and the Republic of Chile on Tuesday 17 August, 2021. The commencement of these negotiations is a significant milestone in deepening bilateral trade relations between both countries following the signing of the General Framework Agreement in October 2020.

During the Opening Ceremony of the negotiations, Trade and Industry Minister, Senator the Honourable Paula Gopee-Scoon expressed anticipation that the Partial Scope Agreement will provide new market access opportunities for Trinidad and Tobago’s manufactured goods. She said “The Agreement will also support Trinidad and Tobago’s trade policy which has identified the Central and South American markets for expansion of exports. We hope to not only be able to export our manufactured goods at preferential rates to Chile but to also seek inputs into production at competitive prices. The private sector of Trinidad and Tobago has expressed a keen interest in this arrangement and is eager for its fruition.”

A Partial Scope Trade Agreement between Trinidad and Tobago and Chile will allow Trinidad and Tobago’s exports to enter the Chilean market of over nineteen (19) million persons at preferential rates of duties. Imports of selected inputs into manufacturing and consumer goods will have reduced duty. This Agreement will also seek to eliminate non-tariff barriers and foster cooperation between the countries in mutual areas of interest, including trade facilitation and electronic trade.

Trinidad and Tobago and Chile share a very important trading relationship, with the trade balance traditionally favouring Trinidad and Tobago. In 2020, Trinidad and Tobago’s exports to Chile were estimated at TT$ 333.5 million and were primarily dominated by energy products such as ammonia, liquefied natural gas and urea. It is anticipated that this Agreement can assist with diversification of T&T’s export base to Chile toward the non-energy sector and also increase export values. Non-energy products exported to Chile in 2020 included aromatic bitters, rum and liqueurs and cordials. On the import side, trade has been fairly stable over the last five years, with products valued at TT$ 148 million imported from Chile in 2020. The top imported products included tissue, wood products, clothing, grapes and frozen fish.

Also delivering Remarks was His Excellency Rodrigo Yañez, Vice Minister for Trade, Chile who reiterated Chile’s commitment to furthering the negotiations and strengthening bilateral trade with the Caribbean and in particular Trinidad and Tobago. Additionally, Chief Negotiator of Chile, Mr. Felipe Lopeandía noted that the Agreement will represent a powerful tool to reinvigorate both economies and stimulate bilateral trade. It also presents an opportunity to maintain and promote the exchange of the products that constitute traditional exchange and stimulate new products towards more diversification.

The First Round of negotiations will span over three days and conclude on Thursday 19 August, 2021. Discussions will include areas related to market access, rules of origin, sanitary and phytosanitary measures, technical barriers to trade, trade facilitation, trade remedies, competition policy and legal and institutional issues.