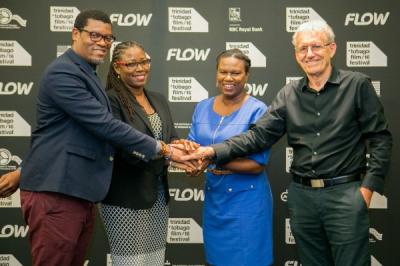 The Trinidad and Tobago Film Company (FilmTT) is excited to announce the return of Film Festival Season. Film Festival Season, first launched by FilmTT in 2016, brings national attention to the three indigenous film festivals taking place between September and November 2018 and to the role they are playing in developing audience tastes for local content, and industry capacity through training and knowledge transfer opportunities.

“Film festivals serve several critical roles,” explains Nneka Luke, General Manager of FilmTT. “They are a source of information and entertainment for audiences eager to discover new ideas; they provide a platform for new and seasoned producers to exhibit their content to the public through screenings; they stimulate screen-based tourism for the country by attracting international guests; and they are important networking hubs for members of the screen-based and arts and culture communities, where connections are regularly made. For FilmTT, strategic investment in film festivals that focus on local content and content producers is one direct way of facilitating industry development, through structured, well-managed partnerships, while encouraging T&T’s mass audience’s growing tastes for non-mainstream content.”

As a strategic marketing communications campaign, Film Festival Season aims to not only increase awareness of the activities in the film and animation sectors, but also to create a sense of anticipation for and pride in local creative products; in this case, films.

FilmTT is also sponsoring activities in each festival that will have a direct impact on building capacity among local and regional content producers and creators.

At the ttff/18, there will be a Two-Day Business Seminar designed to educate attendees on the critical aspects of the business of screen-based content production. Through a series of panels featuring T&T and international experts during 20th-21st September, attendees will learn about funding, distribution, the recoupment life cycle of a production, co-productions, and more. The goal of the seminar is to provide producers with tools for financial success in creating and monetising their content.

On 3rd-4th November during their festival, Green Screen will host a FilmTT-sponsored workshop called The Art of the Interview, which will focus on interview techniques for documentary filmmakers. Participants will learn best-practice methods of finding the story, shot selection, camera placement and lighting from experienced content producers. FilmTT will also sponsor the 18 years and over prize of the Very Short Shorts Competition Mobile Film Competition.

For 2018, FilmTT will sponsor Animae Caribe’s Great-8, an ongoing project dedicated to developing, pitching  and selling more local animated content, and a Digital Media School Day targeting secondary and tertiary level students with an interactive experience in animation and the digital sector.

More details on these events will be comes available as each festival nears.

The trinidad+tobago film festival (ttff) – 18th – 25th September
This festival is this premiere regional festival for T&T, Caribbean and diaspora film and industry events. Founded in 2006, the ttff has screened and awarded many notable T&T films, developed audience tastes for content, been a platform to connect Caribbean filmmakers to each other and to international industry professionals, and hosted industry development labs, workshops and presentations. www.ttfilmfestival.com.

Green Screen The Environmental Film Festival – 31st October – 3rd November
This festival is focused on increasing environmental awareness and behaviour change through film screenings and discussions. Green Screen is now in its 8th year and recently held its Very Short Shorts Mobile Film Competition, with selected films being screened during this year’s festival. FilmTT will be sponsoring the winning prize in the 18 years and over category.   www.greenscreentt.com.

Animae Caribe Animation and Digital Media Festival – 19th – 23rd November
An animation and digital arts event focused on teaching through workshops, demonstrations, and connecting T&T animators to international industry; it has been a primary platform for the growth of the animation sector during its 17-year history. Animae Caribe has been connecting international animation professionals to youths and budding animators through workshops and presentations and continue to build bridges in the sector across the region. www.animaecaribe.com.