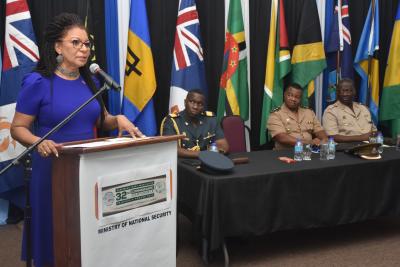 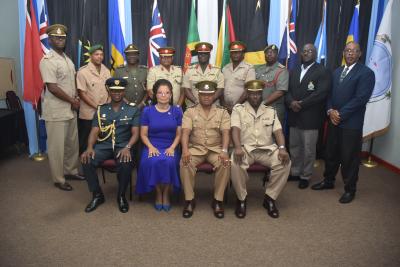 Port of Spain: Parliamentary Secretary in the Ministry of National Security the Honourable Glenda Jennings-Smith M.P. called on leaders of Cadet Organizations from across the region, to continue providing a nurturing environment that teaches, promotes and reinforces the skills needed for young persons to become empowered as leaders of the future.

Parliamentary Secretary Jennings-Smith delivered remarks today August 28, 2019 at the opening ceremony of the 32nd Annual Caribbean Commandants’ Conference for Cadet Forces and Corps. Sixteen (16) visiting Commandants of Cadet Organizations from countries across the region are in Trinidad and Tobago to participate in the conference. The event is being held at the Office of Law Enforcement Policy (0LEP), London Street, Port of Spain from Wednesday August 28 to Friday August 30, 2019.

The Parliamentary Secretary stated that at this time in our region’s collective history, it is imperative for us to guide our young people towards engaging in meaningful and positive lifestyles. In this regard, leaders of the Cadet Forces and Corps from across the region are obligated to invest in the hearts and minds of young people.

Ms. Jennings-Smith described Cadet Organizations as institutions that have a major role in progressive human development and nation building, as they make leaders out of young men and women.

She stated: “by investing your time and training in the region’s youth, Cadet Organizations can greatly assist in creating a society that shares the social attributes and cultural norms of trust, goodwill, honesty, respect, tolerance, integrity, benevolence, civic pride, social justice and community spirit.”

She urged Cadet Officers to wear their uniforms with pride, to carry out their duties marked by discipline, respect for others, genuine service and to
demonstrate that shining example for the young people under their respective mentorship.

The Caribbean Commandants’ Conference for Cadet Forces and Corps is held annually and is a forum for leaders of Cadet Organizations to hold collective discussions on mutual and common concerns as it pertains to Cadetting in the Caribbean region.

It is expected that over the next few days discussions will be held on Youth development through cadetting, approaches for achieving goals set in the Caribbean Commandants Conference Strategic Plan and the way forward for regional cadetting.