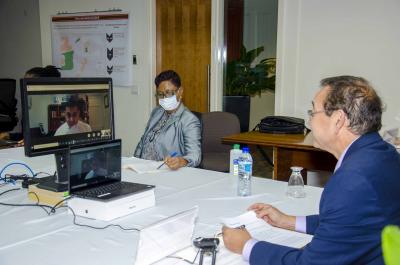 16/12/20 - Port of Spain: The Minister of Energy and Energy Industries, Senator the Honourable Franklin Khan met with Lord Ahmad of Wimbledon, United Kingdom- Minister for South Asia and the Commonwealth, via videoconference on Wednesday 16th December, 2020. The Ministers discussed the recent UK Fossil Fuel Announcement made by Mr Boris Johnson , Prime Minister of the United Kingdom, on 12th December 2020 at the Climate Change Summit 2020, which stated the intention of the United Kingdom to end their direct taxpayer support for fossil fuel projects overseas.

Lord Ahmad of Wimbledon provided context to the major policy shift announcement and  also  reassured Minister Khan  of the United Kingdom’s continued commitment to work with Trinidad and Tobago.  He clarified that the announcement did not impact the existing operations of the UK energy firms operating in Trinidad and Tobago, namely Shell and BP, as those contracts relate to foreign investment overseas and are not related to the support of the United Kingdom’s taxpayers.

Minister Khan acknowledged the clarification and reaffirmed the long history of cooperation between the United Kingdom and  Trinidad and Tobago as a member of the Commonwealth. Minister Khan then underscored the pioneering role of UK energy firm, Lightsource, BP and Shell to the development of power from renewable energy, which will form an important aspect of this country’s energy mix . The solar project, which is carded to begin construction in 2021, will take approximately 18 months to be completed and will be among the largest in the region. It will contribute to Trinidad and Tobago’s compliance to its Paris Agreement commitments of reducing carbon emissions and achieving a target of 10% renewable energy in Trinidad and Tobago.

Further to Trinidad and Tobago’s  Paris Agreement commitments, Minister Khan also took the opportunity to discuss the actions taken to meet this country’s cumulative goal of reducing carbon emissions by 15% by 2030 from the industry, transport and power generation sectors.

Trinidad and Tobago’s  commitment to reduce emissions from transportation fuels is taking place on a phased basis with CNG fuel leading the way.  In the area of power generation, Minister Khan noted that Trinidad and Tobago is one of approximately six countries in the world where 100% of electricity is generated from Natural Gas. Minister Khan endorsed the trajectory of renewable energy in the area of power generation and noted that from a purely commercial point of view, this will result in  the replacement of some of this country’s natural gas from its domestic use for local power generation, so  that can be potentially exported to earn foreign exchange.

Senator the Honourable Franklin Khan and Lord Ahmad pledged to continue dialogue on the transition to a zero carbon future.