Tribute to the former President of the Senate Dr. Linda Baboolal 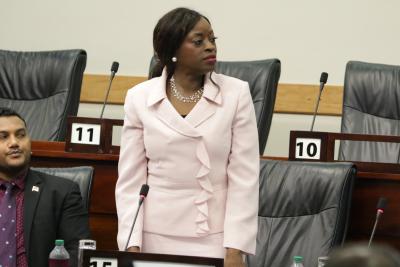 Tribute to the former President of the Senate Dr. Linda Baboolal by Senator The Honourable Donna Cox Minister of Communications in the Senate during 39th Sitting of the 4th Session of the 11th Republican Parliament on Wednesday, 25 September 2019

Madame President, I rise today to engage in one of the few tasks in which few, if any of us, as Parliamentarians, take any delight, if only because it forces us to confront the reality of our own mortality.

However, when I reflect on the life of Dr. Linda Baboolal, I know that she, who would have comforted many through their own experiences of loss and grief, would expect no less from us. Indeed, if there was anything she taught us, it would have been to share the grief of those who mourn, and to rejoice with those who are joyful.

Madame President, you sit today in the shadow of Dr. Linda Baboolal who was the first female to have served as President of the Senate of Trinidad and Tobago, and she did so at a time in this country’s development when governance was on trial. Senators would recall that she was first elected to the Seventh Parliament and served from April to October 2002 when the failure to elect a Speaker in the other place forced another general election.

During that time, there were no Opposition Senators, and it therefore required the President to exercise all her political acumen so as to ensure that the proceedings met all the criteria for constitutional and public propriety.

Dr. Baboolal was re-elected to serve as President of the Senate in the Eighth Parliament from October 2002 until its dissolution in September 2007. In this period, she was called upon to exercise the proverbial patience of Job in a sharply divided Senate. It was only her indomitable spirit and unshakable faith that allowed her to navigate the difficult waters of that tempestuous period. Her class, her grace, her sharp wit, and firm rulings brought back in line many a rambunctious Senator. Her exchanges with the Leader of the Opposition Senate’s bench have now achieved viral fame, but at no time, can anyone recall her compromising the high standards she had set for herself and the Senate in pursuit of order, decorum, and fairness.

By virtue of her position as Senate President, Dr. Baboolal also served this country in its highest office, as acting President of the Republic. In both offices, she brought a measure of dignity, balance and emotional intelligence that can only come from a woman of worth.

Dr. Baboolal enjoyed her period of service not only in this august Chamber but also in the other place, where she served as the Member of Parliament for San Juan/Barataria, as well as in the Ministerial portfolios of Consumer Affairs, Health, and Social Development. Today her name is remembered with due deference and utmost respect in those communities she served, if only because she treated her constituents with the same measure of respect she reserved for this honourable House. She was a personal friend of mine who offered advice solicited or un-solicited.

Madame President, you, me, and all female Senators today owe a huge debt of gratitude to Dr. Baboolal, for we not only shelter in her shadow, but we stand on the shoulders of a giant of a woman, whose contribution to country was as selfless as it was exemplary, and as meaningful as it is worthy of emulation.

Today, on behalf of a grateful nation, and a grieving Party, I offer my deepest and sincerest condolences to her husband Dr. Michael Baboolal, her children, grandchildren and extended family. Let us remember Dr. Baboolal as we continue to shape our tomorrow by our actions today.