Trade Minister meets with the Ambassador of Japan 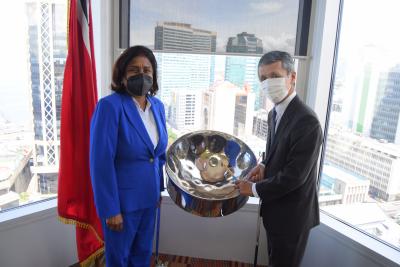 28 April, 2022: - On Wednesday 27 April, 2022, Senator the Honourable Paula Gopee-Scoon, Minister of Trade and Industry met with His Excellency Matsubara Yutaka, Ambassador of Japan where discussions centred on bolstering trade, business and investment relations between Trinidad and Tobago and Japan.

Ambassador Yutaka confirmed his commitment to deepening the bilateral relationship with a focus on strengthening cooperation in key areas including climate change, agriculture, technology and manufacturing.  Minister Gopee-Scoon elaborated on the strength of Trinidad and Tobago’s Manufacturing sector highlighting several areas including the success of the country’s Cocoa industry, rum and alcohol production, the former using the indigenous Trinitario variety to produce high quality chocolates with 100% local inputs for the global export of chocolate products. The Minister further indicated that Trinidad and Tobago is open to investments in the Manufacturing sector and expressed interest in welcoming Japanese manufacturers at the soon to be completed Phoenix Park Industrial Estate. Trinidad and Tobago’s competitive energy cost and highly educated workforce were highlighted, as well as export opportunities available through the country’s various trade agreements.

Japan has the third-largest economy in the world with a GDP (current prices) of approximately US$5.058 trillion in 2020.  The strength of its economy is mainly attributed to its Electronics industry, which is the largest in the world and its Automobile industry, which is the third largest in the world. The country is known as one of the "Manufacturing Superpowers," with its Manufacturing industry accounting for approximately 20% of the total GDP in the fiscal year 2019-20, led by the production of automobiles, industrial robots, semiconductors and machine tools.

Trinidad and Tobago’s top export to Japan for the period January to November 2021 was Methanol, valued at TT$179 Mn accounting for 98.3% of total exports that year, followed by Raw Cocoa Beans valued at TT$1.53 Mn (0.8%) and Natural Asphalt at TT$0.79 Mn (0.4%). Between 2016 to November 2021, the top imported products from Japan to Trinidad and Tobago comprised mainly diverse sizes of motor vehicles, parts and accessories and other types of machineries.

The Ambassador extended an invitation for Trinidad and Tobago to participate in Expo 2025 Osaka, Kansai, Japan from 13 April to 13 October, 2025.  The Osaka Expo will be held under the theme “Designing Future Society for Our Lives” and is envisaged to advance international efforts to achieve the Sustainable Development Goals (SDGs) of the United Nations. Trinidad and Tobago’s attendance at this Expo would also present an opportunity for further bilateral cooperation in key economic areas.