Trade and Industry Minister welcomes the new Board of InvesTT 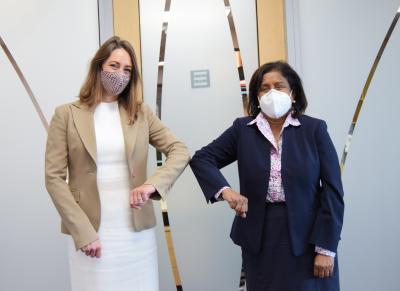 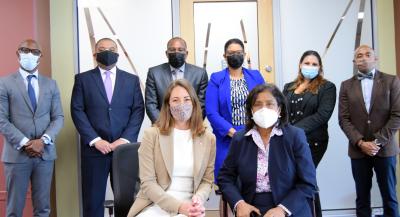 17 September, 2021: Senator the Honourable Paula Gopee-Scoon, Minister of Trade and Industry met with the newly appointed Chairperson of invesTT Limited, Ms. Franka Costelloe, and the new Board of Directors on Thursday 16th September, 2021, at the Ministry’s Head Office in Port of Spain.

In her Remarks to the newly appointed board, Minister Gopee-Scoon expressed confidence in the combined experience, knowledge and skillsets which each member brings to the new board. She also expressed her appreciation for their willingness to serve, and effect the right policies and investment promotion strategies on behalf of the Government. The fundamental role of InvesTT, the national promotion agency, is to attract FDI into the country’s prioritized non-energy sectors, to drive the economy’s diversification thrust. Of particular importance, the Minister noted the Agency’s commitment to marketing and tenanting the industrial parks, namely, Tamana InTech Park, Moruga Agro-Processing and Light Industrial Park and the Phoenix Park Industrial Estate.

The Honourable Minister recognized the need to revitalize the non-energy sector and build resilience in the face of the global challenges presented by the Covid-19 pandemic. She acknowledged that the agency has already been adapting and reinventing its lead-generation and marketing activities despite these challenges. Remarking that foreign investment is paramount to stimulate economic activity Minister Gopee-Scoon said, “Hidden within this current global pandemic is an opportunity to invigorate the economy. InvesTT has shown agility in its response to supporting investors’ evolving needs during this time, and has taken a proactive approach to renewing its role as an investment promotion agency.”

Newly appointed Chairperson, Franka Costelloe, brings to the Board a wealth of knowledge and experience from her stewardship in the private sector, particularly in the fields of manufacturing, investment and finance, strategic planning and executing and corporate governance.  Ms. Costelloe is currently the Director of Lifetime Roofing Limited and is the immediate past President of the Trinidad and Tobago Manufacturers’ Association.

The Board of Directors include: