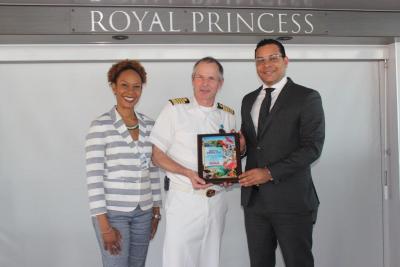 The Royal Princess Cruise line made its inaugural visit to the port of Port of Spain this morning with 3,451 passengers, which included a record-breaking 1,319 people scheduled to participate in pre-booked tours at popular tourist sites and attractions across the island.

Many of the passengers are retirees from Europe and the United States.

Tourism Minister Honourable Randall Mitchell was on hand to greet tourists at the Cruise Ship Complex this morning and he wished them an enjoyable stay here. He said he was pleased that cruise tourism continues to grow in the country.

Later, during the Crest Exchange, which takes place during a ship's inaugural visit to a country, Mitchell presented a plaque to the Captain of the Royal Princess, Nicholas John Nash, who in turn also presented Mitchell with a plaque. Tourism Trinidad Ltd's (TTL) CEO, Camille Campbell was among those who attended the brief ceremony, which was followed by a guided tour of the ship.

Royal Princess is a sister ship to the Caribbean Princess which has visited Trinidad six times during the 2018/19 Cruise season.

Many of the tourists purchased souvenir items from the craft vendors located at the Cruise Ship Complex before going on their respective tours. The ship is expected to leave Trinidad for Brazil today.