Three to get monies for Take One feature film grant 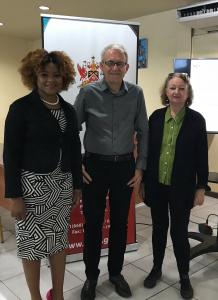 (L-R) Dr. the Honourable Nyan Gadsby-Dolly, Minister of Community Development, Culture and the Arts with Bruce Paddington, Founder and Director of New World Film Centre and Annabelle Alcazar, Programme Director, Trinidad and Tobago Film Festival at the launch of the Feature Film Grant earlier this year.

Three (3) first time feature film producers will be awarded two hundred and fifty thousand dollars ($250 000.00) each by the Ministry of Community Development, Culture and the Arts (MCDCA) as recipients of the inaugural  Take One Feature Film Grant.

Dr. the Honourable Nyan Gadsby-Dolly, MCDCA Minister revealed the names of the three winners during her feature speech at  the launch of the 2018 ttfilmfestival on September 18,2018 at the National Academy for the Performing Arts (NAPA). The objective of this Grant, is to provide first time feature film producers/directors with the opportunity to bring their vision to the Trinidad and Tobago Film Festival big screen and Carifesta in 2019.

Launched in June 2018, the Take One Feature Film Grant, with technical support from Dr. Bruce Paddington and Annabelle Alcazar of New World Film Centre (NWFC), issued a call for submissions. Emerging local first time feature filmmakers, were invited to submit proposals which included the title of the film and its length, a synopsis and script, the CVs of producer, director, main crew members and actors, examples of previous work, production schedule, budget together with evidence of additional money raised, and/or a plan to source additional funds and distribution plan. Applicants also had to confirm that they were willing to work under the supervision of the executive producers (MCDCA and NWFC) at all stages of the production. When the deadline date of July 31 closed, there were twenty-one (21) submissions.

Minister Gadsby-Dolly shared the sentiments of the panel that it was not an easy decision, as the quality of the submissions were excellent. The three recipients of the first Take One Film Grant of $250 000 each are:

3.         Fixerflim on behalf of Jian Hennings with Grace and Saleem

As expressed by Minister Gadsby-Dolly, “film is a powerful vehicle to communicate the moments, feelings, and experiences in life that often cannot be captured by words. It is about reconstructing a reality through the lens of an adventurous storyteller. Film therefore is an infinite resource and as part of the creative and cultural industry it is our new oil and gas; it therefore requires strategic, well planned investment to ensure its sustainability.” The Take One Film call is the third such major investment by the MCDCA having been a lead sponsor of the TTFF for a second consecutive year and a sponsor for Hero, the extraordinary Life and Times of Mr. Ulric Cross which premiered at the 2018 TTFF Gala opening.