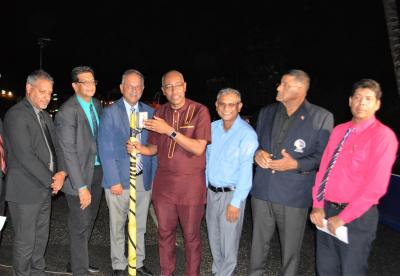 The Manzanilla / Mayaro Main Road is the latest area in the country to benefit from T&TEC’s ongoing Public Lighting Programme.

The installation of 80 solar LED (light emitting diode) streetlights will immediately benefit motorists who use the roadway, which was unlit for many years.

Public Utilities Minister Senator Robert Le Hunte was publicly commended by the Member of Parliament for Mayaro, Rushton Paray, for his persistence in ensuring the project came to fruition.

T&TEC’s Chairman, Keith Sirju, explained that the LED’s have a longer life span, exceeding ten years, as compared to five years for the High Pressure Sodium lights, and consume half the electricity for the same level of lighting.

In his address, the Public Utilities Minister said that projects like this one speak to the whole thrust towards conservation, optimising the use of resources, whether they be energy or water resources, so that more people can benefit from a sustainable use of these resources over a longer period of time.

Minister Le Hunte noted that conservation is a primary pillar of sustainable development, adding that it is one which the Government of Trinidad and Tobago takes very seriously.

In 2016, T&TEC embarked on a number of pilot LED projects. Some of these projects have been completed around the Queens Park Savannah, along the BWIA Boulevard leading to the Piarco International Airport, along the Milford Road in Tobago, and along the Solomon Hochoy Highway in Gasparillo.

The latest of these projects, demonstrates T&TEC’s commitment to optimise the use of the country’s natural gas resource by conserving energy in its public lighting installations.

The lights are powered by solar energy, which means they operate independently of the electricity grid. The installations are also equipped with batteries which can store power for up to five days of service in the event of extended bad weather.

Also delivering remarks at the launch was Minister of Agriculture, Land and Fisheries, Senator Clarence Rambharat, who commended T&TEC on the completion of the project, saying it will make the community a safer place. He noted the project was undertaken, giving due consideration to the fact that the area is a nesting site for leatherback turtles.