Statement by the Hon. Colm Imbert Minister of Finance on the laying in Parliament of the Income Tax (Amendment) Bill, 2018 May 25, 2018 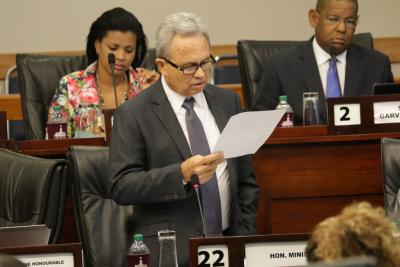 However, no progress was made during the 2011-2015 period to address the shortcomings that would enable the country to progress to Phase 2 of the Peer Review Process.
The shortcomings resulted in Trinidad and Tobago eventually being given an overall rating of non-compliant with international standards on exchange of information at the Ninth Plenary Meeting of the Global Forum in 2016.

The Global Forum required Trinidad and Tobago to take the necessary steps to bring the country in compliance with the current standards and to also implement the new Global Forum standards by June 2017. However, this could not be done within the short timeframe. Trinidad and Tobago is expected to undergo in June 2018 its second Peer
Review. In this regard, the required legislation should be in place by that time.

The rating of being non-compliant was one of the main contributors of Trinidad and Tobago being listed as a non-cooperative tax jurisdiction by the European Union last year. But it does not mean, as has been incorrectly interpreted by some commentators, that Trinidad and Tobago has been declared to be a tax haven. We are simply not compliant in terms of the sharing of information with tax authorities in other countries

FATF requires States to not only be technically compliant but also to show that there is effective meeting of obligations. Part of the effective requirements of the Fifth Round of the Mutual Evaluation. Process requires that investigations for the purposes of the Proceeds of Crime Act and the Anti-Terrorism Act be conducted without delay. This has also affected our compliance with the FATF 40 Recommendations.

To become complaint with Global Forum, European Union and FATF requirements, Trinidad and Tobago is required to have in place the legislative framework that would allow for the exchange of information and the administrative structure for that exchange. In this regard, two related Bills were laid in this House today, to address the
many deficiencies, namely the Income Tax Amendment Bill 2018 and the Mutual Administrative Assistance in Tax Matters Bill 2018. It should be noted that it is our intention to lay a third related Bill at the next sitting of this Honourable House dealing with the Exchange of Tax Information between Trinidad and Tobago and member countries of the Global Forum, et al.

The Bills will require a 3/5 constitutional majority of both Houses for passage in Parliament. As was agreed to earlier today, therefore, it is proposed that the Bills go before a Joint Select Committee (JSC) of the Parliament for consideration and report.

TT One Link: One stop-shop for all Government products and services
HDC is working with state agencies to deal with flooding in La Horquetta
Closure of Siparia District Court
Arrangements at the Town and Country Planning Division (TCPD) for the Period August 03, 2020 to August 14, 2020
Trinidad and Tobago COVID-19 (Novel Coronavirus) Update # 376