Statement by Colm Imbert, Minister of Finance to the House of Representatives on the laying in Parliament of the Trinidad and Tobago and Revenue Authority Bill, 2018 May 25, 2018 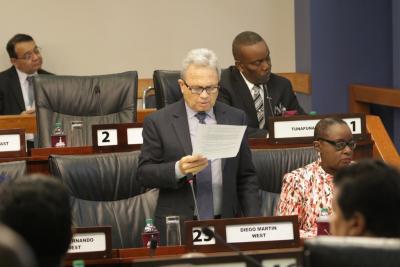 Madam Speaker, the Trinidad and Tobago and Revenue Authority Bill, 2018, is principally intended to modernize and fortify the collection of revenue through institutional strengthening, focusing on accountability and greater efficiency. The benefits of a Revenue Authority include:

It has been the Government’s stated policy that the introduction of a Revenue Authority in Trinidad and Tobago will boost stability and investor confidence and is necessary for budgetary reform. Throughout the Caribbean Region, we observe that, in recent time, some of our counterparts have implemented Revenue Authorities as an important step
in revolutionizing revenue collection.

It is expected that the Revenue Authority can significantly enhance tax administration, generate additional revenue, create new jobs, and increase revenue collection by up to 3% of GDP, or an additional $5.0 billion per year. According to agencies such the World Bank and Fiscal Affairs Department of the IMF, Trinidad and Tobago continues to receive poor ratings with respect relating to the collection of taxes. Our planned establishment of a Revenue Authority should contribute to a decided improvement in Trinidad and Tobago’s rating.

The Authority, Madam Speaker, will allow greater transfer of information between the BIR and the Customs which is needed to reduce the incidence of tax evasion. The new Institution will also allow for tax administration to be supervised by an independent Board, which will be responsible for introducing high quality and accountable management. We estimate the increase in revenue collection in the first year after the proposed Revenue Authority is fully established to be in excess of $300 million, rising exponentially thereafter.

Madam Speaker, experience in the region and elsewhere has demonstrated the benefits of having an integrated Revenue Authority as the core of the tax administration system, as it brings together the Board of Inland Revenue and the Customs and Excise Division under one administrative umbrella. In light of the above, I laid the Trinidad and Tobago Revenue Authority Bill, 2018 before this House today. The Bill requires a 3/5 constitutional majority, and as such, as was agreed earlier today, the intention is to have this Bill
examined by a Joint Select Committee of Parliament.

TT One Link: One stop-shop for all Government products and services
HDC is working with state agencies to deal with flooding in La Horquetta
Closure of Siparia District Court
Arrangements at the Town and Country Planning Division (TCPD) for the Period August 03, 2020 to August 14, 2020
Trinidad and Tobago COVID-19 (Novel Coronavirus) Update # 376