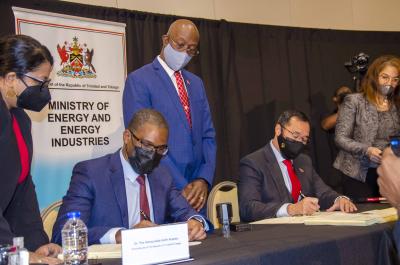 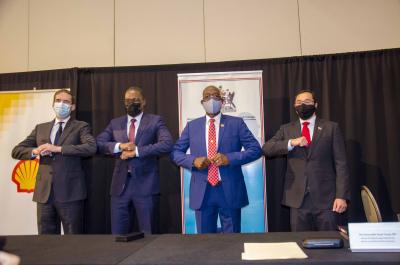 The Ministry of Energy and Energy Industries and Shell Trinidad and Tobago Limited hosted the signing of the Manatee Field Production Sharing Contract at the HYATT Regency today, Wednesday 17th November 2021. This event was the culmination of intensive negotiations between both parties who agreed to key terms and conditions which would lead to the activation and development of the Manatee field which is located in Block 6d in the South- West Marine Area of Trinidad and Tobago.

The feature address was given by Dr. The Honourable Keith Rowley, Prime Minster of Trinidad and Tobago who underscored that inclusive of the terms of the Production Sharing Contract, Shell is required to comply with the government’s Local Content Policy to maximize to the satisfaction of the Minister the level of usage of local goods and services and the employment of nationals of Trinidad and Tobago.

The Honourable Minister of Energy and Energy Industries and Minister in the Officer of the Prime Minister Stuart R. Young MP, reiterated his statement made yesterday to the world’s leading gas exporting countries at the 23rd GECF Ministerial Meeting that, “Gas is here to stay. It is time that we come to the forefront of this conversation, whilst looking to reduce carbon emissions, gas is the way forward. Gas is current and it will carry us forward as the cleaner hydrocarbon fossil fuel into the future.” According to Minister Young the significance of this Production Sharing Contract between the Ministry of Energy and Energy Industries and Shell Trinidad and Tobago is that it demonstrated that Trinidad and Tobago remains competitive in the changing world environment. The Minister also stated that the Ministry of Energy and Energy Industries will be tentatively going out with its Bid-rounds next week, another indicator of our competitiveness.

The key terms and conditions of the agreement include the duration of the Production Sharing Contract for a period of 25 years and financial obligations for the contractor, which include a signature bonus of US$15 million and marketing arrangements in which gas to domestic will be via NGC and exports via Atlantic LNG facilities. Both the Government and Shell have a vested interest in the activation and development of the Manatee field, as it will serve to backfill domestic gas supply as well as Shell’s global portfolio. This common interest served to accelerate negotiations and to expedite today’s agreement, to the mutual benefit of both parties.