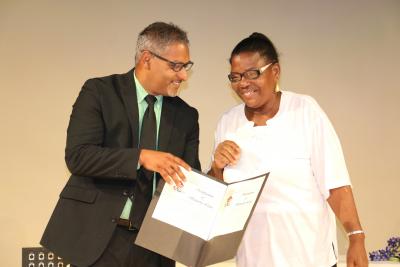 Senator the Honourable Clarence Rambharat, Minister of Agriculture, Land and Fisheries says that retired public servants and generations of their families have been in illegal occupation of Government quarters – at the expense of taxpayers – in excess of twenty (20) years.

Such was the “new category of squatters” identified by the Minister on Friday 20th July, 2018, as he addressed a Statutory Lease Distribution Ceremony hosted by the Land Settlement Agency (LSA) at the Government Campus Plaza in Port of Spain. Among those present was the Parliamentary Secretary in the Ministry of National Security and Member of Parliament for Toco / Sangre Grande, Ms. Glenda Jennings-Smith. The exercise formed part of the LSA’s mandate – under the State Land (Regularisation of Tenure) Act No. 25 of 1998 – to regularise eligible squatters who are in occupation of State Lands.

In emphasising that squatters came “in all forms and fashions”, Minister Rambharat sought to dispel the public perception such “occupation” of State lands were “not only reserved for the down trodden” but “senior technocrats” in the Ministry, who have managed to go undetected for far too long.

He said: “There are about 400 Government quarters in the Ministry of Agriculture, Land and Fisheries; some of which are occupied by people who retired more than 20 years ago and I am not talking about the doubles man nor the ‘PH’ driver, but senior technocrats in the Ministry, whom have been allowed to occupy these quarters for the purpose of doing the work of the Ministry and upon their retirement, just continued to live there with you, the taxpayer, paying their light bills and water rates. I found in some cases, four generations of persons living in this manner and in one such instance, a person at Long Circular Road in Port of Spain – where the real estate is close to $1,500 a square foot – who is living there on account of being the relative of a former watchman who occupied a watchman quarters in 1957.”

The Minister explained that while residential squatting had developed simply because “the country had not been able to produce sufficient, low cost residential solutions to for all because the demand continued to be significant”, it was incumbent on the current custodians of the State assets to be more vigilant and accountable in the discharge of their duties. He said: “We have to take a stand. Those who occupy Government quarters by virtue of their employment,

should do so but when the time comes for you to leave, you should be encouraged to leave and where the encouragement fails, you should be made to leave.” He also alluded to the Government’s continued “recognition of squatters in the country” – as the law made provisions for those in undisturbed possession of State land to make a claim under adverse possession law – but also noted that with the recent changes, “no claim can be made for the regularisation of land on a protected area; an environmentally sensitive area and most importantly, on a forest reserve.”

Minister Rambharat, in signalling to the lease recipients, the tremendous “value” inherent in their new possession, said it was his hope that “the enforcement of the obligations” in respect to the land tenure, was one which both present and future administrations will be fervently committed to safeguarding.

He said: “As a Minister I have tremendous opportunity to bring joy to people but there are days – and today is one such day – when I have the very onerous task of sending matters to the Commissioner of Police, for transmission to the Fraud Squad as we continue our work to deal with those who believe that the assets of this country are theirs for their private, illegal and corrupt dealings.”

Also speaking at the Ceremony were the: Permanent Secretary (Ag.) in the Ministry of Housing and Urban Development, Mr. Haimdath Ramoutar; Chairman of the Land Settlement Committee (LSA), Mr. Ossley Francis and the Chief Executive Officer of the LSA, Mr. Hazar Hosein.