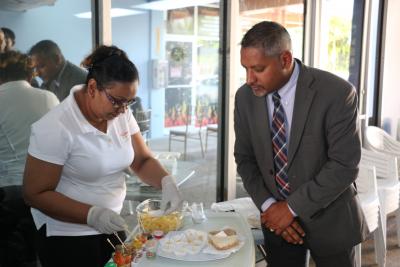 Unless people are prepared “to put their money where their mouths are” and lend “serious” support to local farmers, processors and manufacturers when procuring their groceries and market produce, then they ought to keep silent on the food import bill in Trinidad and Tobago."

Thes are the sentiments expressed by Senator the Honourable Clarence Rambharat, Minister of Agriculture, Land and Fisheries, as he delivered the Feature Address at the launch of ‘Fiery Store & More’ on Friday 15th December, 2017, at Atlantic Plaza in Point Lisas. Minister Rambharat’s comments came at the heels of his commendation to the store’s proprietor, Sharon Chautilal of Habanero Pepper Sauce Company Limited, whom he praised for her willingness to incorporate the commodities of value-added producers alongside her pepper sauce products. He said:

“I am quite familiar with the Habanero Company and what caught my attention was the distinct packaging and branding of their products and the fact that no preservatives were used in their manufactured produce. Also of particular mention was a report done by Caribbean Export Consultants, which identified Habanero as having one of the best food safety systems they had seen in the region.”

The Minister said he had identified some 200 locally manufactured, agro-based products which he hoped to “showcase at NAPA in Port of Spain” soon, so as to maximize on “some of the Carnival traffic” and increase the visibility of such products so as to “make accessible more of what is produced locally.”

Chautilal, who dubbed the ‘Fiery Store & More’ as “the first of its kind in Trinidad and Tobago”, said it was her aim to “generate excitement in the nation’s Pepper Industry” as her customers will be able “to sample as well as purchase pepper products from Trinidad and Tobago and the rest of the world - all year round.” She added that local manufacturers showcasing their produce in her store will benefit from exciting marketing opportunities, inclusive of a courtesy feature on a global e-commerce website in order to facilitate export sales.

Chautilal revealed: “Some of the local products being sold at the store have been marketed on an international scale and have reached the shelves of countries as far as Paris (France) which is encouraging as there is a need to measure our quality and competitiveness on a global basis.”

She thanked those present for attending the launch and said she “looked forward to working along” with her local manufacturers and producers “to make Trinidad and Tobago better while having some fun and adding flavour to life."

Also speaking at the launch of the store was the Chief Executive Officer of the Export Company of Trinidad and Tobago (exporTT), Dietrich Guichard, who said he was “impressed by the passion and enthusiasm” with which the Company’s directorate approached the business, citing too that those were precisely the attributes which guaranteed a successful enterprise. He welcomed the presence of Minister Rambharat at the launch, whose support he lauded as testament to the Government’s overall commitment to the diversification of the nation’s economy.