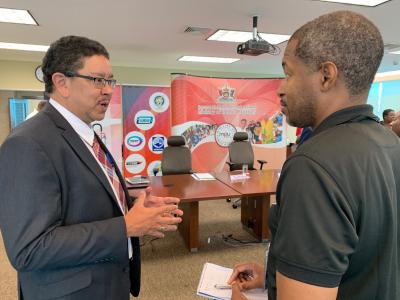 Cabinet has approved a programme of exploration, development and rehabilitation for WASA, that will greatly enhance the supply of water in Trinidad and Tobago.

The programme of works to be carried out over fiscal 2019 – 2020 will involve the exploration, drilling and equipping of new wells and the rehabilitation of existing wells, as well as initiatives that will result in a reduction of the levels of non-revenue water, through the replacement of high leakage pipelines.

Making the announcement on Friday was Public Utilities Minister Senator Robert Le Hunte, at a news conference at the Ministry’s Head Office in St. Clair.

Minister Le Hunte said the expected expenditure will be in the region of 255 million dollars of which 204 million has been approved by Cabinet with additional funding for the programme coming from the Public Sect6or Investment Programme, PSIP.

The work will include the rehabilitation of 19 wells that span wellfields at Chatham, Tucker Valley, Arima, Granville, las Lomas Sangre Grande and Valencia, as well as the equipping of 17 new wells in at Las Lomas, Chatham, Moka, Piarco/ Oropune, Aripo, Grande Riviere, Matura, Sangre Grande and Arima. An additional eight wells will be drilled in the Maraval / Tucker Valley area.

The well exploration and drilling programme will also extend to Tobago, with eight production wells to be drilled in Plymouth, Mason Hall, Diamond Estate, Bacolet and Hillsborough.

Minister Le Hunte said in addition to the 9.3 kilometres of pipeline being replaced in fiscal 2018, a further 23 kilometres of high leakage mains have been identified for replacement over the next 18 months at an estimated cost of 73. 6 million dollars.

High leakage mains will be replaced in Port of Spain, South Oropuche, Point Fortin, Mount Lambert Guanapo and St. Augustine areas. The replacement of these mains will improve the reliability of water supply in these areas and as a result the level of non-revenue water is expected to decline from 50 to 35 per cent.

Minister Le Hunte also seized the opportunity to remind the population that although the rainy season has started there was still a need for citizens to practice good water conservation habits, as it will take some time for the country’s reservoirs to return to acceptable levels.