The Prime Minister’s record of support for the Hindu community 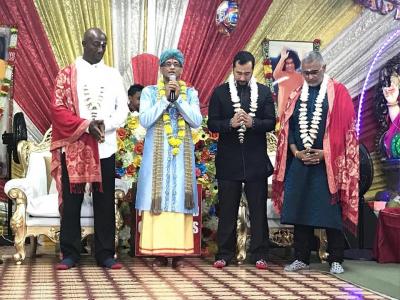 I wish to respond to an article under the headline Pundit accuses PM of showing contempt to Hindus published in the Guardian on Monday, 28 October 2019.

As a matter of public record the Ministry of Communications wishes to point out that the Prime Minister Dr the Honourable Keith Rowley attended the Divali Nagar celebrations as recent as last year (2018), an event that was covered by a number of media houses, including yours. Your reportage on that occasion was carried under the headline “PM on Divali Nagar's influence, Expression of best in T&T.”

However, this was not a one-off show of support. The Prime Minister has consistently attended, hosted and engaged the Hindu community in Trinidad and Tobago over the years.

Just this year, at the Diplomatic Centre, the Prime Minister hosted over twelve (12) Hindu organizations, including their spiritual heads, from all over Trinidad at a Deya Lighting Ceremony. State media, TTT, broadcasted this event on two separate occasions: 27 October and 28 October 2019.

As is customary, the Prime Minister issued a message to commemorate Divali 2019.  And last month, on 6 September 2019 the Prime Minister and other Government officials celebrated the Hindu festival of Ganesh Chaturthi at the Vishwanath Mandir in Sangre Chiquito.

These events are a clear demonstration of the Prime Minister’s support and respect for the Hindu community and show that Pundit Satyanand Maharaj’s accusations are unfounded and meritless.

Additionally, to suggest that the Prime Minister is not entitled to celebrate his 70th birthday, betrays the real value Pundit Maharaj places on sacred and momentous events, and is contrary to his public utterances. Seventy years of good health, strength and mental capacity is not to be easily dismissed.

Furthermore, the Prime Minister had scheduled an engagement with his pastor in Tobago prior to the announcement of the date of Divali. Given the circumstances outlined above, no right thinking or reasonable person would begrudge the Prime Minister a celebration of this major milestone or time with his family, particularly because the job of the Prime Minister never ends; it travels with him wherever he goes.

I hope that on reflection, Pundit Maharaj would retract his comments which appear to be divisive, unfounded and unjustified.