Postponement of NPO Spirit of Tan Tan Show at NAPA 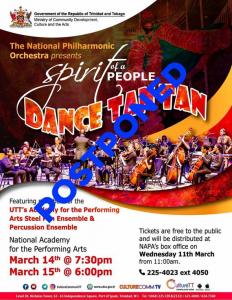 Members of the public are advised that the Spirit of Tan Tan by the National Philharmonic Orchestra (NPO) at The National Academy for the Performing Arts (NAPA) has been unavoidably postponed to a date to be announced.

The Ministry of Community Development, Culture and the Arts deeply regrets any inconvenience caused. The new date for this event will be released as soon as possible.

The concert was originally scheduled to take place at the Lord Kitchener Auditorium, at the National Academy for the Performing Arts (NAPA) on March 14th and March 15th.

Dance Tan Tan is a symphonic work for orchestra, pan ensemble, and percussion. The music will celebrate the joyous dance of Minshall’s legendary Carnival Queen, who is buoyant, vivacious, defiant, and mischievous. The piece explores rhythm as a creative and sustaining force in music. The four movements of the work present the shifting, complex textures that are part of the rhythmic landscape of Trinidad and Tobago.  The music hints at the unrestrained joyfulness of children at play, and invites imagery of dancing, running, leaping, skipping, teasing and even roughhousing. Once re-scheduled, there will also be performances by members of the University of Trinidad and Tobago’s Academy for the Performing Arts Steel Pan Ensemble and Percussion Ensemble.