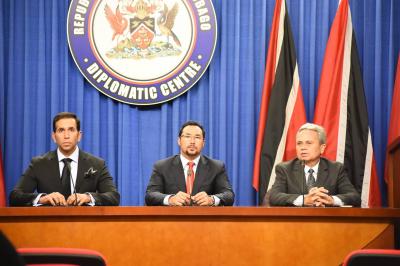 The Attorney General confirmed that Cabinet has given its approval to bring the Cybercrime Bill to Parliament. This Bill will replace the Computer Misuse Act. He said that the Bill has been considered by successive governments.

The Attorney General said the Computer Misuse Act does not give the required level of protection to the most vulnerable victims of cyber harm. He also stated that the Bill needs a three-fifths majority. The Government will propose that this legislation should be sent to a Joint Select Committee.

The Minister of Finance, Colm Imbert, attended the briefing to again answer questions from the media and address concerns regarding the implementation of the Property Tax Act.

The Minister of Finance said the property tax waiver expired on December 2015 and as such the tax is payable for both 2016 and 2017. He said currently the Government has not made a decision one way or the other regarding waiving the taxes due for 2016.

He said if Government decides to forgo the collection for 2016 it would require returning to Parliament to amend the legislation. He reiterated that the Government is currently focused on starting the assessment process for 2017 and that it was a long way off from making a policy decision about taxes due for 2016.

The Minister used the opportunity to clarify that the current economic climate will also be used to determine the Annual Rental Value.