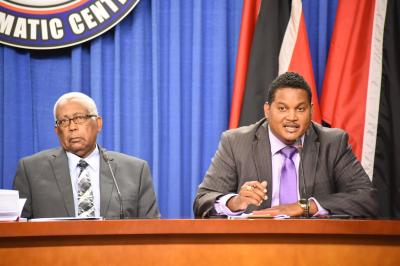 Minister Garcia announced that the next Chancellor of the University of the West Indies will be Mr. Robert Bermudez of Trinidad and Tobago. Mr. Bermudez, a successful businessman, was recommended by the Source Committee and unanimously ratified by CARICOM as the University is being called upon to generate more funds to meet its operating costs.

Additionally, the Minister of Sport announced that the Brian Lara Academy has been completed and is scheduled to be opened following a UDECOTT handover ceremony on the 13th May 2017. Expected to make a guest appearance at the opening is cricket legend Sachin Tendulkar as well as several other local and international cricket stars.

Minister Smith also announced that Trinidad and Tobago will continue its sport tourism thrust as we will be hosting volleyball and water sport tournaments for the first time in the upcoming months. Trinidad and Tobago will be the first Caribbean host of the Grand Prix event in volleyball as well as the CCCAN water sports meet which will be held at the National Aquatic Centre.

The Minister of Sport also extended congratulations to all T&T athletes who participated in the CARIFTA games, particularly members of the swim team.