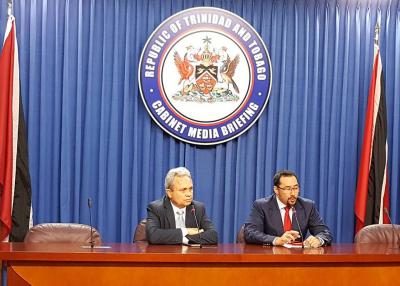 Speaking at yesterday's Post Cabinet Media Briefing (Thursday 11th January, 2018), Minister in the Office of the Prime Minister and the Office of the Attorney General and Legal Affairs, the Honourable Stuart Young, announced that Cabinet has agreed that Trinidad and Tobago will ratify the Paris Climate Agreement.

Speaking at yesterday's Post Cabinet Media Briefing (Thursday 11th January, 2018), Minister in the Office of the Prime Minister and the Office of the Attorney General and Legal Affairs, the Honourable Stuart Young, announced that Cabinet has agreed that Trinidad and Tobago will ratify the Paris Climate Agreement.

As such, the Ministry of Foreign and CARICOM Affairs has been engaged to do what is necessary to transmit this message to the wider global community. This decision was made following careful consideration of the oil and gas sector on which our local economy is based.

Additionally, the state funeral for the late Professor George Maxwell Richards, former President of Trinidad and Tobago, is being spearheaded by the Ministry of Foreign and CARICOM Affairs and the Ministry of National Security. The remembrance ceremony is scheduled to take place on Wednesday 17th January and invitations have been sent out to regional Heads of State. Professor Richards’ body will lie in state on Monday 15th and Tuesday 16th January so that citizens may pay their respects. The family has also requested the government’s support for a ceremony to honour the scattering of Professor Richards’ ashes in San Fernando. Once the details of this event are confirmed they will be shared with the public.

Cabinet has also created a body to interface with private enterprise with the aim of discovering projects which members of the private sector wish to pursue as well as examining those who come forward. A five (5) man Implementation Committee has been named which will be chaired by Christian Mouttet.

Additionally, the Minister of Finance, the Honourable Colm Imbert, announced that Caribbean Airlines (CAL) will be re-activating its flights from PoS to Havana, Cuba. This flight will be offered twice a week and forms part of the GORTT’s effort to increase trade with Cuba. The Minister of Trade and Industry, the Honourable Paula Gopee-Scoon, will be travelling on the inaugural flight to represent the Government.

Extensive research has indicated that this flight will be well sustained by demand as it is expected to attract South and Central American travellers seeking a simpler travel route. Further, there is a Chinese airline already offering connecting flights between Beijing and Havana via Montreal. It is hoped that CAL will tap into this market and encourage Chinese visitors to travel to Trinidad and Tobago as, once again, this route is more convenient than those currently existing. As noted by Minister Imbert, this new flight route introduces opportunities not only for travel but investment as well.