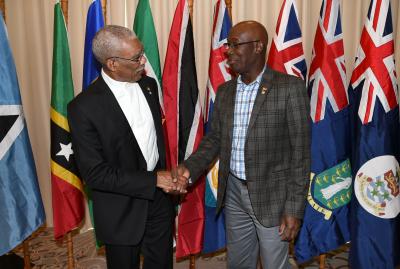 Caption: Prime Minister, Dr. the Honourable Keith Rowley (right) greets President of Guyana, His Excellency Brigadier (Ret’d) David A. Granger on the second and final day of the 28th Inter-Sessional meeting of the Conference of Heads of Government of the Caribbean Community (CARICOM) in Georgetown, Guyana. (Photo courtesy the Office of the Prime Minister)

February 18, 2017: Prime Minister, Dr. the Honourable Keith Rowley, and other regional leaders have approved a draft roadmap for the region’s single Information and Communications Technology (ICT) space. The decision was made on Friday February 17 at the second and final day of the 28th Inter-Sessional Meeting of the Conference of Heads of Government of the Caribbean Community, in Georgetown, Guyana.

This single ICT space will allow for harmonised policies, legislation, regulations and technical standards; create affordable networks and universal access; positively affect roaming rates across the region; and address spectrum and broadband matters. This was identified as critical to accelerating the implementation of the CARICOM Single Market and Economy (CSME) and will be a driving force for social and economic development in the region.

While its implementation will not happen overnight this initiative will be of tremendous benefit to Caribbean consumers and businesses. At Friday's meeting, heads of Government also pledged their support for the establishment of an Interim Tourism Working Group comprising members of the Caribbean Tourism Organisation (CTO), the Caribbean Hotel and Tourism Association (CHTA) and the Caribbean Tourism Development Company (CTDC).

This group will prepare a pilot, region-wide public relations and marketing initiative and include mechanisms for financing by the public and private sector. CARICOM heads also received an update from the President of Guyana, His Excellency Brigadier (Ret’d) David A. Granger, on the ongoing border dispute between the Cooperative Republic of Guyana and the Bolivarian Republic of Venezuela. President Granger acknowledged the efforts of former United Nations Secretary General, Ban Ki-moon, for his work in finding a way forward under the Geneva Agreement. CARICOM leaders also expressed support for the critical role of the Organization of American States (OAS) in resolving the dispute arising from Guatemala’s claims on Belize.

They further called on the international community to continue supporting the OAS in this matter. Finally, the Honourable Freundel Stuart, Prime Minister of Barbados, assured leaders that preparations were well underway for the 13th edition of the Caribbean Festival of Arts (CARIFESTA), which will be hosted in Barbados from 17th – 27th August 2017. It was also agreed that Trinidad and Tobago will host CARIFESTA 2019.

Several other relevant issues were dealt with by the leaders in caucus and will be discussed at tomorrow's media conference at the Diplomatic Lounge, Piarco International Airport which will be hosted by Prime Minister Rowley from 10:30 am.