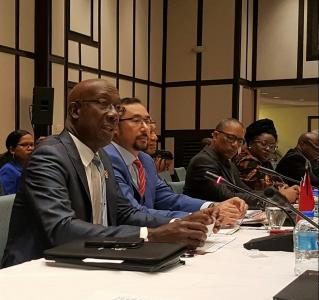 From left: Prime Minister Dr. Keith Rowley and Minister of National Security Stuart Young at the19th Special Meeting of the CARICOM Heads of Government on Security held at Hilton, Port of Spain on Friday May 3, 2019.

Prime Minister Dr Keith Rowley delivered opening remarks at the 19th Special Meeting of the CARICOM Heads of Government on Security. The following is his address.

On behalf of the Government and people of the Republic of Trinidad and Tobago, I extend, as Lead Head of Government for Crime and Security in the CARICOM Quasi-Cabinet of the CARICOM Council for National Security and Law Enforcement (CONSLE), a warm welcome to this 19th Special Meeting of the Conference of Heads of State and Government of the Caribbean Community on Security.

Our meeting today comes a mere five months after we also hosted the 18th Special Meeting of the Conference of Heads of Government of CARICOM on the CARICOM Single Market and Economy (CSME) in December, last year. During that meeting we stressed the importance of security systems for the effective functioning of the CSME, in particular, the free movement regime and we also agreed that this special meeting on Security would be convened early in 2019.

Colleagues, I recall pledging as lead Head of Government with responsibility for crime and security in the CARICOM Quasi Cabinet, to take an active role in all matters pertaining to regional security. That pledge has not waned and as we sit to discuss and determine the way forward in the “Management of the Regional Security Framework,” we are aware that the sustainable development of our Community depends on the safety and security of our citizens.

The region has experienced an evolution in security threats, including but not limited to globalization and the resulting impact of illegal human and narco-trafficking, money laundering, illegal migration and deportation, growing radicalism and terrorism, and the application of technology, the emergence of privatization of security, economic issues, environmental and health issues.

Our Regional Security Framework is the mechanism through which greater collaboration among the Regional Security Forces and Regional Institutions and other entities will operate, in our efforts to combat transnational crime and other security threats. I maintain that a robust regional security architecture is essential to the security of member states.

Given that we are in the process of fine-tuning our regional security architecture, the role and importance of CARICOM IMPACS becomes even more significant as we review the Management Framework for Crime and Security. Trinidad and Tobago, in the 20th Meeting of the CONSLE last month in Grenada also committed to regularizing our financial contributions to IMPACS.

The CONSLE accepted the recommendation that a job analysis be conducted for the position of the Executive Director. Trinidad and Tobago has offered to assist in the execution of the job analysis.

During the meeting of the CONSLE, the CARICOM Secretariat presented relevant findings and recommendations from a report of an internal audit of CARICOM IMPACS. The audit recognized that there were some shortcomings, however, IMPACS is working to correct the recognized areas and will soon have them addressed.

There is a need for us to develop a robust legal framework, as it relates to for example, the Advance Passenger Information System (APIS) and the Advance Cargo Information System (ACIS) as well the need for the collecting and sharing of information. Legal Security Instruments that are still outstanding must be signed and ratified by Member States. For example, one (1) more ratifying state is required for the CARICOM Arrest Warrant Treaty to be entered into effect.

Trinidad and Tobago has adopted the Integrated Ballistic Identification System (IBIS) vendor’s recommended protocol and procedure for acquisition of evidence. Capacity building, in the area of Ballistic information sharing, remains a challenge, but CARICOM IMPACS will continue to work closely with the United States of America (US) on this issue, since a significant amount of guns and ammunition present in our region, are manufactured in the US.

Consequently, today’s meeting will consider a proposal by IMPACS to agree on the strategic initiatives which could be pursued at the Eighth Caribbean-United States Security Cooperation High-Level Dialogue, which is being hosted by the Government of the United States of America, in Washington DC, on May 16th, 2019.

There is also a move to establish the Caribbean INTERPOL Liaison Office and I understand, the organization has already begun working with the Government of Barbados as it relates to the Headquarters’ Agreement.

Further, I am to advise, IMPACS is working with INTERPOL to beginning programming on firearms, cyber security and human trafficking.

Organisations such as the United Nations, the Organisation of American States, the European Union through the European Development Fund (EDF) and the World Customs Organisation are also implementing programmes across the Region, which complement existing projects and activities.
We are grateful for the support of our international partners but we maintain that the CARICOM needs to develop its own set of priorities on crime prevention, firearms, cyber-security, effective monitoring and evaluation and maritime coordination.

During this Special Meeting, we will continue to determine the way forward on a draft Standardized Vetting Policy for Security Personnel to be adopted by the Region. It should be noted that the vetting policy employed by the Trinidad and Tobago Police Service was submitted to CARICOM IMPACS, for its consideration in the development of the Regional Standardized Vetting Policy.

We are aware of the continuing situation in Venezuela and we endorse the view of the current Chairman Prime Minister Harris, who notes that all of us - Heads of Government - are collectively charged with ensuring the continued security and stability of our beloved Caribbean region. As our meetings in Guyana, the United Nations, Uruguay and Ecuador attest, ensuring a peaceful solution to the issue is our first and foremost priority as we work in unison to safeguard our people’s future.

Colleague Heads, ladies and gentlemen, the security of the future of the Caribbean Community will be determined by our ability to more effectively and efficiently respond to, and anticipate threats to our region’s enduring interests. This is the essence of strategic foresight, to identify drivers of change, and to consider potential outcomes and interests to inform strategic decisions. Crime and security is the fourth pillar of the regional integration process and the Council for National Security and Law Enforcement (CONSLE) coordinates security and law enforcement arrangements across the Community.

Let us understand that for us to have a future we must ensure that our citizens are safe and secure.