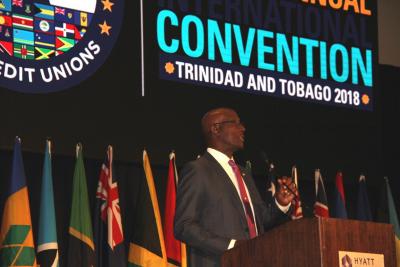 I have to admit that it was with mixed emotions that I accepted your kind invitation to deliver this address on the occasion of your 61st Annual International Convention and Annual General Meeting.

Pleased as I was to have agreed to do so, I was painfully aware that my acceptance of the invitation had been given at a time when the Government of Trinidad and Tobago was not in a position to extend any more than non-financial assistance to the Cooperative Credit Union League of Trinidad and Tobago in assisting in covering the expenses associated with the staging of such a momentous undertaking.

Allow me therefore to place on record the deep appreciation of the Government and people of Trinidad and Tobago to the officers and members of both the Cooperative Credit Union League and to the Caribbean Confederation of Credit Unions for your indefatigable display of magnanimity and Caribbean spiritedness in having this convention staged here in Trinidad and Tobago, in spite of our prevailing economic circumstances, but in full acknowledgement and appreciation of the medium to long term benefits which Trinidad and Tobago is sure to derive from your selfless endeavour.

So, here I am, grateful and delighted for the opportunity to share a few sentiments with your very distinguished audience.

Safely and securely lodged among the archives at the Alma Jordan Library of the St Augustine Campus of the University of the West Indies, is a unique collection of documents which tell the story of the early history of the Cooperative Credit Union Movement in Trinidad and Tobago.

It is known as the Norbert Eriche (pronounced Eh ree shey) Collection. Norbert Eriche was one of the many unsung pioneers of the Cooperative Credit Union Movement whose tireless and endearing efforts, over several decades, collectively and constructively paved the way for us to be assembled here today, to engage in landmark deliberations aimed at further advancing the growth and development of the Sector not only here in Trinidad and Tobago but throughout the Caribbean Region and the world at large.

The names of like-minded pioneers of the caliber of Thomas Malcom Milne generally acknowledged for introducing the concept to Trinidad and Tobago, Claudius Clunis, Noel P Bowen, Peter Roach, Mc Donald Hinds, Donavon Palmer, Fitzroy Dyer and Gary Cross, just to name a few, will forever remain indelibly etched in the annals of the history of the Credit Union Movement in the Caribbean Region.

No greater tribute befits their visionary endeavors than the reality that the Credit Union Movement in the Caribbean Region continues not only to be alive and well but is growing astronomically in strength, stamina and stature. Thanks to the spirit of continuity, commitment and stick-to-itiveness on the part of those of you who have so loyally taken over the reins.

Evidence abounds that the movement has come of age and has taken its rightful pride of place among the most sophisticated and distinguished family of financial institutions worldwide.

And you have done so, having journeyed confidently and triumphantly from the distant past of a colonial era when it was a way of life for commercial banks to heartlessly and indiscriminately turn their backs on the poor and underprivileged for reasons bereft of human kindness or devoid of the minutest modicum of genuine rational justification. It was of no consequence whether the loan being sought was for the purpose of renting a home, to purchase household appliances, purchase school books or send a son or daughter overseas in pursuit of higher educational qualifications or simply to pay for expensive medical attention or to underwrite the cost of burial of loved ones.

Thanks to the exemplary vision and foresight of our fathers and forefathers, those wretched days are behind us: days when populations had to rely on high risk, expensive unscrupulous money lenders, sou sou or plain and simply securing the pennies, day in day out, under the fibre mattresses. Yes, Ladies and gentlemen, thanks to the advent of Friendly Societies and the Cooperative Credit Unions which came to our rescue and proved, against all odds, that they could have met the burdensome financial necessities that were deliberately and systemically denied us.

The records show that the first evidence of credit unionism sprung up in Germany in the 1850s and by the end of the 19th Century had spread its wings throughout the European Continent.

Fast forward to today, when the Movement prevails all over the world, and what do we find?

The figures speak for themselves.

The records also show that up to the year 2016, the number of Credit Unions in the Caribbean was 297 with a membership of 2,505,918. Shares and deposits amounted to 5.3 billion dollars, loans totalled 4.3 billion and Reserves stood at 651.6 million dollars.

The largest number of Credit Unions was registered in Trinidad and Tobago with a total of 129, followed by Barbados with 33, Jamaica 32, Guyana 28, St Lucia 16 and Grenada 10. Smaller Caribbean states were not to be left out, all having registered single digit numbers.

Ladies and Gentlemen, viewed from any perspective, this is remarkable growth and progress on an international dimension over any one decade.

So that Ladies and Gentlemen, when at your 61st Annual International Convention and Annual General Meeting you chose as your theme the topic “CREDIT UNIONS: The Power to change the Future”, no subject could have been more instructive, more eminently timely and indeed more exceptionally visionary. And it is on this theme that I propose to focus my attention as I address you today.

With the exponential growth and development of the Credit Union Movement on the international stage and the inevitable commensurate complexities which go hand in hand with this overwhelming phenomenon, Caribbean Governments are duty bound to work side by side with the leadership of the Sector in ensuring that financial operations are technologically sound, sensibly regulated and continuously monitored and evaluated. These requirements are no different to Governments’ obligations in its relationship with other similarly positioned financial institutions, as the responsibility to protect and preserve the public interest becomes more acute and increasingly demanding.

There is absolutely no doubt that growth has become a critical issue for Credit Unions worldwide: growth in membership, in shares, in deposits, in loan portfolio

and in return on investment; growth in reserves and by all accounts, growth in service offerings.

Cut to the core, Credit Unions, by virtue of their own well deserved development and progress, have dismantled the socio-economic barriers and have elevated their status to a level no less prestigious or in great demand than those of other traditionally endowed financial institutions which hold consumer shares, savings, investments and deposits in trust.

You should therefore expect nothing less than to be held similarly accountable by whatever appropriate mechanisms employed and, as a consequence, be no less subject to sector-specific consumer protection laws and regulations as well as security and sound business performance standards as do banks, insurance companies, pension plans, financial lending agencies, trust institutions, mortgage companies and similar type financial institutions.

Recent malpractices within the Investment, Insurance and Credit Union Sectors of Trinidad and Tobago are enough to justify the imperatives for such mandatory fiduciary oversight.

Initiatives to arrive at consensus on establishment of a mutually acceptable regulatory framework continue to be a work in progress; the principal objective being that of protecting the sanctity and integrity of the public trust.

The upside of this remains, not only that shares and deposits are well protected, but that the Movement gives itself the flexibility to develop and expand its service offerings: emboldened, empowered and enriched by financial regulatory best practices of the highest order: the power to change the future.

In fact, our objective in the Caribbean should be to take a page from the Canadian experience, where credit union members enjoy, in many provinces, higher levels of deposit protection than that which is available to commercial bank customers.

Credit Unions in Trinidad and Tobago, which were originally regulated under the Credit Union Cooperative Societies Ordinance, No. 48 of 1945 are now regulated under the Co-operative Societies Act Chapter 81:03 of 1971.  You need no convincing that, since that time, the world of finance, the economy and the dramatically changing landscape of social development have advanced leaps and bounds, virtually beyond recognition.

But here is the dichotomy. Since the year 1949, as part of a governmental structure to oversee, guide and develop their activities, Credit Unions have been supervised by the Co-operative Development Division under the legislative requirements of the Co-operative Societies Act, Chapter 81:03. This agency is a unit of the Ministry of Labour and Small Enterprise Development.

While the mandate of the Co-operative Development Division includes promoting Co-operatives as viable business enterprises and creating an enabling environment to contribute towards the socio-economic development of its members, it is clear that the Credit Union Movement has substantially outgrown its space and has now established itself as a worthy contender among the most highly regarded and respected families of financial institutions worldwide.

But the real significance, true value and full potential of this phenomenal growth and development will be lost to the world at large if, side by side, the Movement does not come face to face with commensurate levels of independence, responsibility, accountability, authority and maturity: free from dependence upon commercial banks and private sector financial institutions to lodge your membership shares and deposits, free to put the mechanisms in place to compete aggressively, if they so desire, in the provision of the widest range of financial services to all and sundry: ATMs, purchase and sales of foreign exchange, wire transfers, letters of credit, debit and credit cards etc: financial instruments, the escalating cost of which eat away at the shares, deposits and dividends so sacrificially and painstakingly accumulated.

Yes Ladies and gentlemen, long before today, Cooperative Credit Unionism has come of age, and we shall epitomise this only to the extent that we are prepared to walk the talk, take hold of the baton and head toward completion of the final leg.

Make no mistake about it. Power to change the future will call upon you to draw down from the wealth of merits of your proven track record and, above all, summon your richly gifted attributes of tenacity, grit and determination, and by no means least, your abiding and relentless passion for progress and excellence.

Do we have any volunteers?

In conclusion may I once again thank you for the opportunity to have shared these sentiments with you and to wish you God’s richest blessings as you go about your deliberations over the next two days.