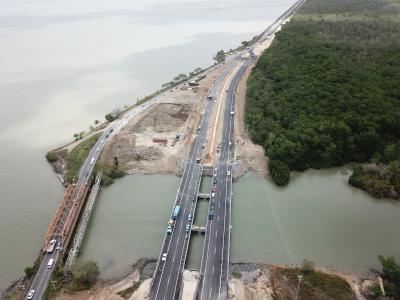 A critical stretch of highway was opened today (June 8th) along the Solomon Hochoy Highway Extension to Point Fortin creating greater ease of access in and out of Golconda, Debe, Penal, Siparia and Fyzabad to the Dunlop Roundabout in Point Fortin.

It is expected that this highway is not simply a stretch of road but a gateway which will create a new path to the further development of Trinidad and Tobago.

In delivering the featuer address Prime Minister and Minister of Housing, Dr Keith Rowley emphasised that the former administration acted against the advice of NIDCO and international best practices in several ways including:

Awarding the project as one contract to a single contractor. As a result of the expanse of the contract, local contractors were automatically ineligible to participate in the project.

On the last working day before the 2015 general election, a contract addendum allowed the contractor to escape termination of contract despite their declaration of bankruptcy. In doing so, it created avenues for legal challenges against the present government which terminated the contract and sought to recover funds from the contractor.

Prime Minister Rowley extended congratulations to Minister Stuart Young and the team at NIDCO and the Office of the Attorney General which succeed against OAS in local and international courts and recovered approximately $1 billion TTD.

Dr. Rowley highlighted that this Government has disaggregated the project into smaller packages thus allowing for greater participation of the local construction sector. Moreover, he noted that local contractors will be held accountable in the same way that OAS was held to account saying, “The Government that I lead will ensure that the interest of the people of T&T is paramount and comes first every time. We must ensure that what is right remains right and what has been done wrong is set right.”

The Prime Minister emphasised that we cannot develop our country in the capricious and corrupt way that we have been doing. He noted that “we need to reject corruption as a way of life in the business of T&T. There are too many corrupt practices involving public funds… and there is a cost to it. It keeps a large part of the population in perpetual poverty.”

Dr. Rowley reiterated the government’s support of the local sector and commitment to settling outstanding debts as we continue on a path of national development.

Also present were representatives of NIDCO as well as members of Cabinet. The Minister of Communications Stuart Young also delivered a thorough presentation on the history of the Point Fortin Highway Extension.

1) Package 2A involve the Completion of the widening of 3.4 Km of the South Trunk Road from east of Dumfries Road to west of Mosquito Creek Bridge

2) Package 2B involve the completion of the widening of 2.0 Km of the South Trunk Road from east of Godineau River Bridge to east of St Mary’s Junction