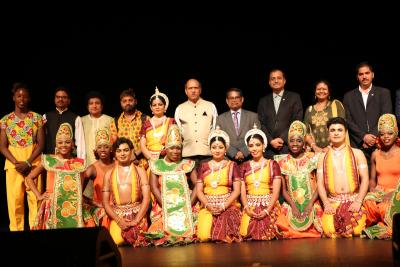 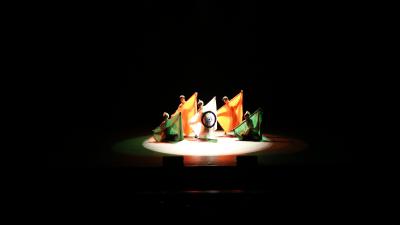 The Indian High Commission, in collaboration with the Mahatma Gandhi Institute for Cultural Cooperation and the Ministry of Community Development, Culture and the Arts, collaborated on a cultural exchange in celebration of India’s Republic Day on Sunday 26 January. The exchange featured a series of Odissi dance recitals, whose artform is a revered element of our East Indian cultural offerings here in Trinidad and Tobago.

Leading off these recitals was the highly acclaimed dancer Ms. Jyotsna Sahoo. Sahoo began her career under Guru Raghu Nath Dutta of the Kala Vikash Kendra, Cuttack, followed by training from Guru Mayadhar Rout, Guru Kumkum Mohanty, and Guru Ratikant Mohapatra. She instructs Odissi dance at the Soor Mandir in Cuttack and conducts workshops all over the world. As a soloist she has performed in Houston, Boston, Dallas, California, Doha, Europe, Australia, Kuwait, and Muscat. She was bestowed numerous awards and honours including the International Women’s award, and Indian Awards including the Nrutya Bisarad, Nrutya Pravina, Nrutya Nipuna, Nrutya Prativa, and the Karamabai Sanmana among others.

The dance recitals commenced on Monday 27th January from 7pm at the National Academy for the Performing Arts (NAPA), followed by a performance at the NCIC Nagar on Tuesday 28th January from 7pm, and finally, on Wednesday 29th January at the Shri Krishna Mandir in San Fernando. Audiences were treated to a dance repertoire including Mokshya (dance of liberation), Barsa Abhisara (exploring the connection of rain and love), Vande Maataram (a patriotic dance to Mother India), Naba Durga (dance to Mother Durga, Goddess of Protection), and Hari Om (a dance devoted to the Trimūrti-Creator Brahma, Sustainer Lord Vishnu and Destroyer Lord Shiva). At the NAPA recital, a special fusion collaboration debuted with dancers of the Malick Folk Perfoming Company.

Originating from the temples of the eastern state of Odisha in India, Odissi dance expresses spiritual themes and can be traced back to the Sanskrit text Natya Shastra. One of the most significant themes is Moksha or spiritual liberation, and this dance has been executed with perfection by local Odissi dance schools for decades. The dance style focuses on symmetric body postures (bhangas), relying on footwork, head and hand gestures to create the perfect expression. The costumes comprise of colourful silk saris, silver jewellery including the iconic belt typically sourced from Odisha, and a crest of white flowers worn on the head.

Mastering this art form requires years of intense practice before a dancer can take the stage. Dance recitals held in Trinidad are usually accompanied by Odissi music on the Pakhawaj (drum), basuri (flute), harmonium, sitar, and manjeera (cymbals).