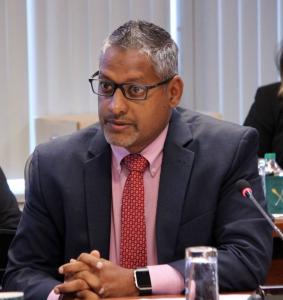 I have read, listened and followed all the talk. Now for the facts. Farmers can access free, food safe, secure temperature-controlled storage with capacity for over one million pounds of produce.

Yesterday I went to the supermarket and meat shop and this morning, I went to the pharmacy. In Barbados I would only be able to do so based on my surname and the day persons whose surnames fall into that section of the alphabet can shop.

From Grenada I saw drone footage, a line of citizens so long the wait to mainly empty shelves is 5-8 hours. In Trinidad and Tobago some people have the luxury of making mischief and saying we are dumping vegetables, fruits, meat and poultry without one shred of evidence.

Sadly, such baseless statements have opened our farmers to ridicule and scorn from a public that will not accept that food, any food, good for consumption was dumped. It did not happen.

Then today. Persons who every dry season cry to the media about lack of water are now boasting about their bountiful harvest, “a larger-than-usual proportion of cassava, eddoes, corn, sweet potato and pumpkin” and are expressing fears about not getting sales. There are Namdevco and other markets for the sale of produce; roadside sales can take place; supermarkets are open and can take produce; and for any excess, over one million pounds of produce can be stored by Namdevco in free, food safe, secure, temperature controlled conditions. These are the facts.

Sometimes the problem is this. Some farmers operate outside the Namdevco support arrangements. They are not registered with Namdevco and Namdevco cannot account for their produce and production levels and harvest times. Many of these farmers make their own sale arrangements with other vendors and they retail on their own. Even farmers who are registered have not updated their production records for over two years. The fact is: media attention makes a good backdrop for a loan write-off. It is not necessary. Namdevco is available to assist any farmer! Dumping is not happening and should never happen.

▪ About this allegation of dumping

After his Press Release on Saturday evening about dumping, I communicated with the MP for Mayaro; Namdevco did a comprehensive visit to Kernahan and Cascadoux (farming areas in Mayaro) yesterday; and the Ministry’s County Officer for Nariva-Mayaro contacted the MP for information and/evidence of “dumping of fruit, vegetables, meat and poultry”.

Nothing could be furnished except reference to a call from one farmer advising about 5000 lbs of cantaloupe available for sale and a call received from a farmers entity saying farmers were dumping their produce and “the Opposition was extremely silent on the issue of Agriculture”.

In the meantime for the past month and more the Ministry, Namdevco and ADB have been doing what we need to do.

When I defined farmers access to consumers as the most immediate issue, a month ago on March 13, 2020 Namdevco set out in detail how Farmers Markets and other markets would operate so that we do not risk closure by the Ministry of Health or National Security. I took personal responsibility for those arrangements.

We worked with Municipal Markets, particularly the critical Central Market; Minister of Rural Development Senator Kazim Hosein worked with the City of Port of Spain and me, to reject a recommendation to close the Central Market. Instead in several visits the Minister of Rural Development working with the Port of Spain City Council got that market to be compliant, and open to this day. With the support of the Minister of Works and Transport and Minister of National Security, the Caricom vessels are coming and local vendors are getting their supplies. Our Caricom sisters and brothers are getting their produce sold. Regional media reported in late March that, “Saboto Caesar, minister of agriculture of SVG has called his colleague Minister of Agriculture in Trinidad and Tobago, Clarence Rambharat “a hero” for SVG and Trinidad and Tobago.”

Recognizing from the outset that with the possible closure of restaurants and other food outlets there would be a reduced market for farmers to sell to, several weeks ago Namdevco was tasked to identify food safe, secure and temperature-controlled spaces for farmers to store and easily access their harvests as required.

NAMDEVCO’s Piarco Packinghouse was readied for farmers and is available at no cost to farmers. In addition, Namdevco has booked food safe, secure and temperature controlled storage space in Trincity for one million pounds of farmers produce, starting immediately with 300,000 pounds. This is also at no cost; farmers can access the facility as required and Namdevco has designated employees to manage this arrangement.

For farmers outside the East West Corridor who have excess produce, eight 40-foot temperature controlled containers are being placed in specific areas, starting with Mayaro and Aranjuez now, Orange Grove, Cunupia and Tabaquite soon after and other areas thereafter. Two other food safe, temperature-controlled containers are being cleared at the Port and would bring the availability to 10 40-foot containers. These are also available to farmers at no cost with designated Namdevco employees supporting the arrangements.

Over the last month other significant activities have been undertaken by the Ministry in support of a wide range of farmers and specific activities. These include import permits, Plant Quarantine issues, changes to sources of imports, and other interventions for our duck producers; other poultry and fisherfolk.

I thank the Ministry’s PS, DPSs, our Chief Vet and other key public officers and employees; I thank the Namdevco and ADB Boards and staff, and single out NAMDEVCO’s CEO for her astute work.

These are the facts. No farmer is at risk of losing a harvest. Markets are open and the Ministry, ADB and Namdevco at in full support. Our work continues.

Minister of Agriculture, Land and Fisheries