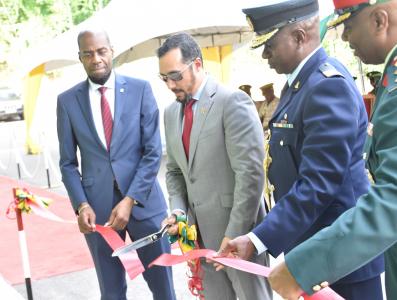 The Ministry of National Security continues to pursue avenues to strengthen the assets of the Trinidad and Tobago Defence Force. This includes the upgrade of military infrastructure, capacity development and the provision of opportunities for continuous learning.

This was the assurance given by Minister of National Security the Honourable Stuart R. Young M.P. at the commissioning of the Army Learning Centre’s (ALC) Leadership Institute for Excellence (L.I.F.E.) Building on August 27, 2019 at Teteron Barracks in Chaguaramas.

The Minister also expressed his gratitude to the ALC instructors for the role they play in the development of the human resources of the Regiment and in shaping the future leaders of the Defence Force.

Minister Young took the opportunity to reiterate that the Ministry of National Security continues to value the contribution that the Trinidad and Tobago Regiment and by extension the Trinidad and Tobago Defence Force consistently make towards the defence and security of our country and citizens. He pledged full support for the ongoing growth of the ALC.

Commanding Officer of the Trinidad and Tobago Regiment Colonel Darnley Wyke in his remarks noted that any modern Military Force must be concerned with continuous learning if it is to remain relevant, ready and resilient. He stated that it was the ALC’s vision for the Trinidad and Tobago Defence Force to become recognised as the region’s premier, ever-evolving and versatile military force, capable and ready to fulfil local, regional and international obligations.

The commissioning ceremony also served to recognise the service of two retired members of the Trinidad and Tobago Defence Force, Major (Ret’d) Doddridge Jack and Warrant Officer Class One (Ret’d) Gilbert Modeste. In honour of their sterling contribution to training and development efforts in the Trinidad and Tobago Regiment, the Library in the L.I.F.E. Building has been named the “Major Doddridge Jack Library” and the Conference Room has been named “Warrant Officer Class One Gilbert Modeste Conference Room”.