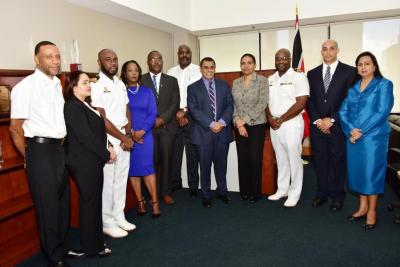 Senator the Honourable Rohan Sinanan, Minister of Works and Transport officially installed the Board of Directors of the Pilotage Authority of Trinidad and Tobago yesterday at the Ministry of Works and Transport. The Authority was installed pursuant to the provisions of section 4(1)(a) of the Pilotage Act, Chapter 51:02, for a period of two years with effect from December 2nd, 2017 and will be led by its Chairman Mr. Ronald Alfred.

Minister Sinanan congratulated members of the Authority on their appointment and wished them a successful tenure in office as they work diligently towards the navigation and safe conduct of ships in and out of ports and harbours in Trinidad and Tobago.

Minister Sinanan also underscored the importance of their role and pilotage services in general to ensure the safety of shipping, port facilities, and the protection of the marine environment within the territorial waters given the inherent potential of damage to persons, property, and the environment.

ABOUT THE PILOTAGE AUTHORITY
Pilotage services are provided by the Trinidad and Tobago Pilots’ Association (TTPA), formerly referred to as the Trinidad Pilots and Berthing Masters Association Limited when it was created in 1939. The TTPA employs marine pilots who have the necessary qualifications, skill and experience, training and local knowledge to enable them to carry out their duties in safely piloting vessels within the waters of Trinidad and Tobago.

These pilots are licensed and governed by the Pilotage Authority to perform pilotage services throughout Trinidad and Tobago in accordance with the Pilotage Act. The Act establishes the Pilotage Authority, under the Ministry with responsibility for Transport and empowers the Authority, inter alia, to make bye-laws for the good governance of the Association, pilots and pilotage services as well as oversee all matters relating to the licensing and conduct of pilots and the safe pilotage of ships within Trinidad and Tobago waters.

Pilotage is the term used to describe the navigation and safe conduct of ships in and out of harbours by licensed mariners referred to as marine pilots. Pilotage includes the provision of transport and the transfer of licensed marine pilots to and from vessels for which pilotage services are required.