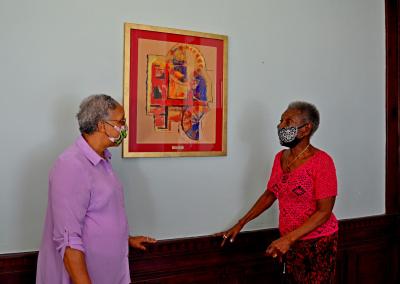 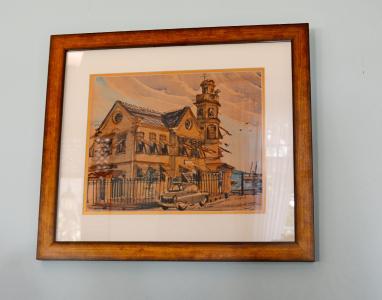 The National Trust of Trinidad and Tobago is pleased to announce the receipt of two art pieces that have been generously donated by Trust member Dr. Yvonne Bobb-Smith.

This exchange took place recently at Mille Fleurs with Dr. Bobb-Smith herself presenting both pieces to the Chairman of Council of the National Trust Mrs. Margaret McDowall.

The pieces donated are Roy Crosse’s “Pan in Action” (1970) and John Newel-Lewis’ “The Harbourmaster’s Office with the Lighthouse” (1957).

Crosse (1945-2014) was a multi-media artist whose talents included composing, sculpting, art, teaching, photography and writing. He was deeply passionate about Art and Pan, receiving many awards, most notably the Ontario Arts Council Award and the New York Foundation of the Arts Award. His work is exhibited both locally at the National Museum and Art Gallery, and abroad at the Museum of the National Center of Afro-American Artists (NCAAA) in Boston.

Newel-Lewis (1920-1991) is most popularly known for his watercolours and lithographs, which captures a key part of Trinidad architectural landscape. He was one of the founders of the Citizens for Conservation (CFC)where his work resulted in halting the intended demotion of George Brown’s “Gingerbread House” opposite the Queen’s Park Savannah. His dedication and passion for architecture culminated in 1973 when he received the Hummingbird medal (gold) for his contribution in this field.

Dr. Bobb-Smith has entrusted the two works of art to the National Trust and they will remain safe and appropriately cared for within Mille Fleur’s walls. Reminiscing about her friendship with artists, Dr. Bobb-Smith noted the challenges these artists faced while exploring the extents of their talent in world that did not always see the end-purpose behind their passions. “It is amazing that they were able to capture and be part of a lasting expression of features unique to Trinbago culture.” She recalls how her own career as an educator at the University of Toronto and later at the University of the Trinidad and Tobago (UTT) allowed her not only to be a teacher but to always be a learner, yearning for further intellectual development. She insists that her “I like to maco” attitude compelled her to join the Trust as it represented a creative yet regulated space for exploring our culture.

“We are extremely grateful for the support of Dr. Bobb-Smith, a longstanding member and friend of the National Trust. Mille Fleurs will make a lovely home for these cherished works of local art” said Margaret Mc Dowall, Chairman of the National Trust. Ms. McDowall noted that Mille Fleur is a unique and important heritage property that is ideally embodies the philosophy of adaptive re-use.  “The historicity of the space is the perfect complement for displays and events by diverse creatives and cultural heritage stakeholders. It is a space where we intend to facilitate hosting a variety of activities so that everyone will feel like they have a place here.”