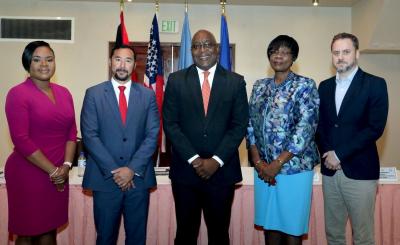 Minister of National Security, the Honourable Stuart R. Young, M.P. is reiterating the importance of educating young people from an early age about the negative impact of all drugs.

Minister Young was speaking at the opening ceremony of the Adolescent Drug Intervention Workshop which took place on Tuesday July 23, 2019 at the Mount Irvine Bay Resort, Tobago.

Presenting the keynote address at the opening ceremony, Minister Young called on the workshop participants to put to use all that they would learn in the week-long training session. He urged them to apply themselves to defeating adolescent drug use and mis-use.

The Minister suggested to participants that at the end of their training, they seek to educate young persons on the evils of drug use and encouraged them to use the educational tools available to them to show adolescents the dangers and consequences of drug use to the individual and to society.

The Drug Intervention Workshop is a collaboration between the Ministry of National Security’s National Drug Council, the Tobago House of Assembly (THA), the United States Embassy in Port of Spain and the Inter-American Drug Abuse Control Commission of the Organization of American States (CICAD-OAS). Its aim is to strengthen the capabilities of persons working with adolescents and youth who are using and are addicted to substances.