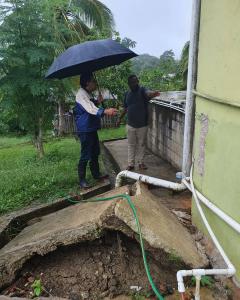 Following reports of increased geological activity at the Piparo Mud Volcano, National Security agencies have been monitoring the situation and are currently working with key stakeholders to observe ongoing activity at the site.

The Office of Disaster Preparedness and Management (ODPM) has been in consultation with the Disaster Management Units of the Ministry of Rural Development and Local Government and with Mr. Xavier Moonan, Senior Geoscientist at Touchstone Exploration. Mr. Moonan has conducted numerous tests at the site as well as drone surveys to produce a 3D mapping of the area. Residents have also been consulted on the increased activity.

Just three days ago, one resident reported cracks forming on the Piparo Main Road which also caused damage to his home. The scent of sulphur was also noted.

To maintain public safety and security, officers from the Princes Town Fire Station, the Trinidad and Tobago Police Service (TTPS) and Municipal Police have cordoned off the area to prevent members of the public from entering the space. The area is now closed to vehicular and pedestrian traffic. The TTPS has also increased patrols in the area.

The Ministry of National Security is advising all citizens, visitors and Piparo residents to keep away from the immediate area surrounding the mud volcano and to refrain from compromising their personal safety as it is currently deemed an active zone.

A coordination meeting is scheduled between all key stakeholders on Thursday 26 September, 2019 to further coordinate mitigation and response activities.