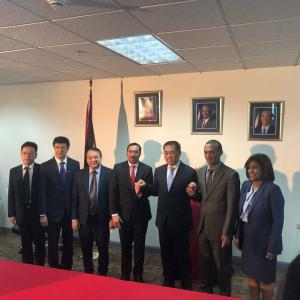 I am pleased to be part of this auspicious occasion to mark the commencement of two significant projects arising out of the Visit of Dr. the Honorable Keith Rowley, Prime Minister of Trinidad and Tobago to the People’s Republic of China in May 2018. The fact that this morning’s ceremony has occurred so soon after the Honourable Prime Minister’s Visit, demonstrates the vision and resolve of the Government of Trinidad and Tobago to deepen its commercial ties with the People’s Republic of China.

The Government of Trinidad and Tobago is cognizant of the fact that the country’s sustained growth and development are contingent on consistent streams of high quality foreign direct and domestic investment. One fundamental prerequisite of attracting such investment is the development of strategic spaces through which investors can operate and collaborate.

If we look at the top investment destinations across the globe, special economic zones and industrial parks have been consistently utilised as instruments for attracting and maintaining FDI inflows. Therefore, if we are to successfully and aggressively compete for economic prosperity, it makes economic and business sense for Trinidad and Tobago to develop and sell industrial lands and economic spaces. It is also very critical that these lands be investment ready by virtue of an enhanced offering, to an international standard, which can be so marketed.

The development of the Phoenix Park Industrial Estate is indeed a timely one as the Chinese Government is currently rolling out its own Belt and Road Initiative (BRI), which aims to promote increased market integration and economic co-operation in strategic countries and regions across the globe. This initiative promises over US$1 trillion in infrastructure development across the globe, and Chinese investors are actively seeking to enter or expand their interest in the Latin American and Caribbean market.

The new Estate will be developed through the collaborative efforts of eTecK and the Beijing Construction Engineering Group, which was formally established through the signing of this morning’s Memorandum of Understanding (MOU). Under this MOU, I am pleased to announce that the Beijing Construction Engineering Group has committed to:

Additionally, this Park will be financed through a loan agreement with the Export-Import Bank of the People’s Republic of China in the amount of US$104,295,000 and will:

Some of the other distinguishing features of the park include:

-   Functional and aesthetical value – equal attention will be given to the functional design, as with the aesthetics and recreational aspects of the Park.

I am pleased to mention that even at this early stage, one major international firm is currently collaborating with the Government to be the anchor tenant by establishing a Regional Distribution Centre on approximately 10 acres of the new Estate.

Additionally, as I mentioned earlier, the Beijing Construction Engineering Group has guaranteed the operations of 10 Chinese firms in the Park. In this regard, there is interest in the following areas:

This overwhelming interest therefore demonstrates the confidence which the investor community already has in the new Estate. In fact, according to the Beijing Construction Engineering Group, each factory will contribute approximately US$20 Million per year, therefore resulting in upwards of US$200 Million in annual revenues from the expected ten (10) new operating companies.

These are not the only benefits to be derived from the establishment of the Estate.  Based on conservative estimates of the future cash inflows and the initial capital outlay, the project is envisaged to be a successful one. Once fully operational, the Park would provide space for 60 to 80 factory shells and directly employ over 4,500 persons, as well as contribute as much as US$1.6 billion per year to our GDP. Some one thousand persons are expected to be employed during the construction phase of the Project.

I am therefore pleased that we have taken the first step today towards the realization of this modern world class Industrial Estate in Trinidad and Tobago. Once completed, the Phoenix Park Industrial Estate will not only serve as a prototype for good governance, but will also become a magnet for future investments in our expanding economy. It will also reinforce Trinidad and Tobago as the premier investment destination in the region and further strengthen our ties with major investors and governments across the globe.