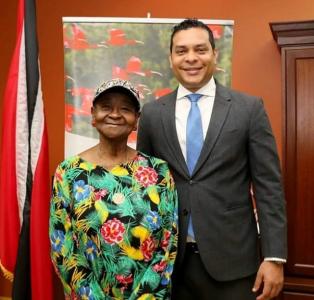 Tourism Minister, Honourable Randall Mitchell joins the rest of the national community in congratulating Calypso Rose on her outstanding contribution to the promotion of the calypso art form internationally over the past several years. “It is with a deep sense of appreciation that we congratulate Calypso Rose for continuing to promote T&T’s culture on the international entertainment stage and we salute her. She continues to be one of our most prolific, international cultural ambassadors on every stage, whether it is in the US, France or the Caribbean.”

Mitchell said: “Every time Calypso Rose appears on a stage abroad she promotes our islands and more people will want to visit our country to experience more of our unique tourism offerings.”

Calypso Rose was joined by another one of T&T’s international cultural ambassadors, Soca superstar Machel Montano during the rendition of her new song entitled “Young Boy”.

Calypso Rose, an advocate for non-violence against women, was awarded the nation’s highest award, the Order of the Republic of T&T in 2017.

Calypso Rose’s “Far From Home” album won the World Album of the Year at the Victory de la Musique ceremony in France in 2017, which is considered to be the French equivalent of the Grammy Awards. She was the first citizen of Trinidad & Tobago to win the 2016 Artist Award by the World Music Expo, which is an international networking platform for the world music industry.