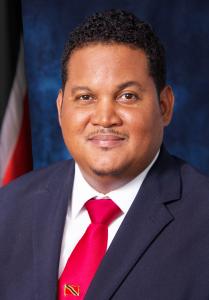 The Minister of Sport and Youth Affairs, the Honourable Darryl Smith

November 9, 2017: The Ministry of Sport and Youth Affairs has begun to formulate the legislative framework for a new policy that is geared toward rescinding the existing Boxing Control Act Chapter 21:52 and subsequently dissolving the Trinidad Boxing Board of Control to establish the new Trinidad and Tobago Combat Sports Commission.

Speaking at the Commission's Stakeholder Consultation on Friday 3 November, 2017, the Minister of Sport and Youth Affairs, the Honourable Darryl Smith noted that this move is intended to develop combat sports and its affiliates in Trinidad and Tobago.

This policy will not be limited to those involved in boxing alone but it will be tailored to all stakeholders involved in disciplines that fall under the umbrella of “combat sports.” Upon its establishment, the new Trinidad and Tobago Combat Sports Commission will be responsible for:

The Minister also noted that the National Governing Bodies (NGBs) for sport, especially those which oversee combat sports have a legal responsibility to provide, at the very least, a regulatory framework that allow participants to practice and participate in their sport in a safe environment. Additionally, they should be provided with access to appropriate medical, health and safety services commensurate with combat sports since the nature of combat sports lends to a high risk of serious bodily harm or injury.

Minister Smith expressed that "these disciplines continue to grow in popularity and it is my hope that as we continue to promote sport development in this country, other disciplines within this genre of sport will also grow in their appeal."

Under the existing legal framework, boxing is the only combat sport that is statutorily regulated in Trinidad and Tobago. As a consequence of this, other disciplines under the umbrella of combat sport such as, mixed martial arts, kickboxing and sambo are presently operating without robust statutory protection. Furthermore, there are no legislative provisions to guarantee indemnity in cases of injury or death, when participants engage in boxing or alternatively any form of combat sport. It is against this background and an acknowledgement that the Boxing Control Act is dated, that the proposal to adopt a new legislative framework was advanced and subsequently approved.

The Minister concluded by stating "it is with a sense of pride and patriotism that I recount... that 2017 has been the best year in sport for our athletes and for our country. I daresay that you, our valued stakeholders play a great role in facilitating such achievements and it is my hope that we will continue to work together for the advancement of sport."