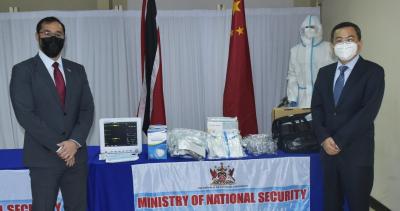 During the brief handover ceremony at the Ministry of National Security’s Head Office on Abercromby Street, Port of Spain, Minister Young took the opportunity to welcome His Excellency Qiu to Trinidad and Tobago. He expressed his gratitude to the Ambassador for the provision of the equipment, stating that the items will assist in Government’s efforts to mitigate the spread of COVID-19 in this country.

Both the Minister and the Ambassador noted that the handover of items was an example of the existing longstanding bilateral relationship and historical cooperation between Trinidad and Tobago and the People’s Republic of China.

The PPE includes portable ventilators, patient monitors, medical face masks, protective coveralls, and medical goggles for use by the Trinidad and Tobago Defence Force, in the execution of their duties.