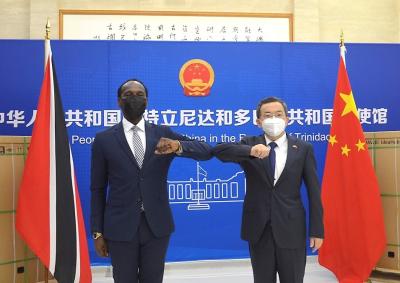 Minister Hinds expressed his gratitude to the Ambassador for the provision of the equipment, stating that the device will facilitate greater interconnectivity between Ministry stakeholders and assist with the hosting of virtual meetings and video conferences.

Both the Minister and the Ambassador noted that the donation was an example of the longstanding bilateral relationship and historical cooperation between Trinidad and Tobago and the People’s Republic of China.

Minister Hinds and His Excellency Fang Qiu also welcomed the opportunity to further collaboration in the areas of law enforcement and public safety.