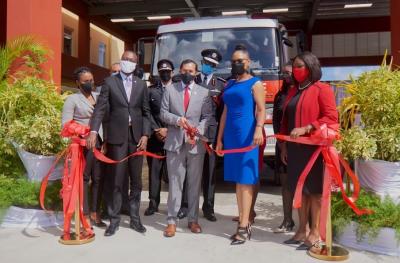 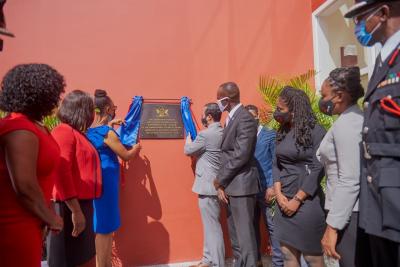 Port of Spain: The Ministry of National Security has increased public safety services for all households, schools and businesses in north and eastern Tobago with the official opening of the Roxborough Fire Station on Tuesday August 04, 2020.

Delivering the feature address at the Opening Ceremony for the new fire station yesterday, Minister of National Security the Honourable Stuart R. Young M.P. described the official opening as “demonstrative of this Government’s commitment to provide all the necessary resources to improve the firefighting preparedness, responsiveness and capabilities of the Trinidad and Tobago Fire Service (TTFS), with increased coverage, in this particular instance, for Roxborough and environs”.

Minister Young took the opportunity to underscore that the Ministry of National Security recognises the role the Trinidad and Tobago Fire Service plays in the preservation of public safety. He noted that since assumption as Minister of National Security, he has prioritized the well-being of the members of the Trinidad and Tobago Fire Service. The Minister reiterated that the Ministry remains committed to ensuring that the TTFS has the required manpower, accommodation, access to modern methodologies and equipment to effectively carry out the organisation’s mandate, to provide efficient and effective public Fire Protection and Emergency Services to the Republic of Trinidad and Tobago.

The Minister noted that the Ministry has advanced upgrades to infrastructure and facilities at fire stations across the country, including the Scarborough Fire Station in Tobago where repair works are presently at forty-five percent (45%) completion. Minister Young thanked the hardworking men and women of the Trinidad and Tobago Fire Service who put their own lives on the line to save lives and property across the nation.

Also speaking at the event, Acting Chief Fire Officer Mr. Marlon Smith commended his officers for persevering in the execution of their duties during these challenging times in the country. He indicated that firefighters serve as first responders in times of emergency and the new station will bring a measure of comfort to members of the community that the Fire Service is ready to respond in instances of distress and hazards. He stated that the new fire station will not only provide coverage for Roxborough, Speyside and Charlotteville but will also support the work of the Scarborough Fire Station.

Also in attendance at the opening of the new fire station were Chief Secretary of the Tobago House of Assembly (THA) Assemblyman Ancil Dennis; THA Secretary of Health, Wellness and Family Development Councillor Tracy Davidson-Celestine; Member of Parliament for Tobago East and Minister in the Office of the Prime Minister – Gender and Child Affairs the Honourable Ayana Webster-Roy; and senior officials of the Urban Development Corporation of Trinidad and Tobago Limited (UDeCOTT).

The new Roxborough Fire Station was designed as a two-storey steel reinforced concrete structure, fully air-conditioned with wired glass windows throughout and carbon monoxide monitors. It includes dormitories, a gymnasium, a laundry room, vehicle bay, an audio/visual lecture loom to facilitate the continued training of officers and firefighters and a dedicated firefighting kit storage room. The fire station will also accommodate the establishment of a Fire Prevention Unit where officers will administer fire safety training to residents of Tobago.