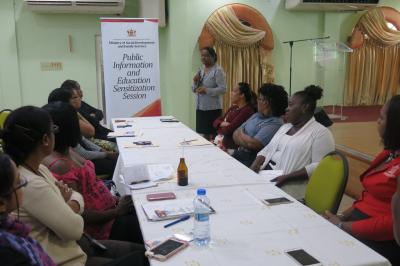 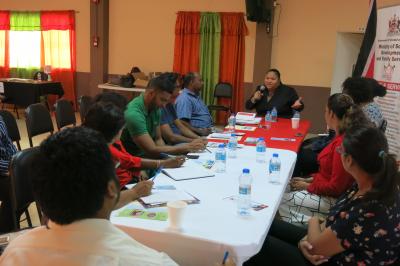 In keeping with its objective of strengthening resilience for the social and human development of all citizens, the Ministry of Social Development and Family Services concluded the most recent edition of its Public Information and Sensitization Sessions (PIES). Between the months of May and July, nine sessions were hosted across the St. Patrick West district and included communities such as Cedros, Fyzabad, Palo Seco, Point Fortin and Vistabella.

PIES is a multi-prong approach which is used by the Ministry, to convey and gather information from stakeholders. The information, is used to inform future outreach efforts. As part of the implementation process for the Ministry’s National Social Mitigation Plan (NSMP), these sessions were strategically aimed however, at assessing the social impact of retrenchment on individuals and communities. As such, staff engaged with numerous district officials, as well as, representatives of village councils and community-based organisations, to determine how the Ministry’s policies, programs and services could be of greater value to those who were most in need. The visits also provided a forum for discussions about existing services and how they could be improved, in the interest of residents.

Many advocacy groups expressed a desire to expand the involvement of the Ministry’s National Family Services Division and Social Welfare Offices, to address the psychosocial impact of ageing, unemployment and migration. For the period October 2018 to March 2019, the National Family Services Division recorded 2,597 requests for counselling regarding domestic violence, child abuse, co-parenting and unemployment were registered. Of these 173 came from the south-western region. The Division, which also has oversight for community-based parenting workshops, continues to experience an over-subscription in registration for these courses by adults.

It is the intent of the Ministry of Social Development and Family Services, to make these recent findings an item of priority on the agenda of the recently commissioned Inter-Sectoral Advisory and Policy and Programmatic Oversight Committees. Both committees are charged with the responsibility of implementing various aspects of the NSMP, which will be phased on a short, medium and long-term basis.