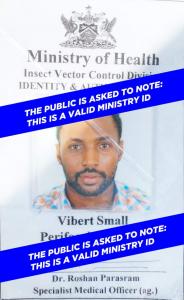 Officials of the Ministry of Health have been advised of the circulation of an image of the Ministry-issued identification for Vibert Small, Perifocal Operator, and the accompanying false public information.

The public is advised that Vibert Small is a bona fide member staff of the Insect Vector Control Division (IVCD) of the Ministry of Health. Mr Small was authorized to perform insect vector control work in the West Moorings area on the day in question.

The measures implemented by the IVCD aid in controlling the spread of diseases through the ongoing perifocal work, larviciding, adulticiding, source reduction, and health education/community participation. These activities are done routinely throughout the year with approximately three to four cycles of perifocal work being completed annually. This means that homes in high-risk areas are visited approximately three to four times a year;

Members of the public are encouraged to facilitate all health-related activities of legitimate IVCD staff as their interventions help to safeguard the lives of the population. All legitimate employees of the IVCD should have authentic Ministry of Health identification in their possession. Persons who still require confirmation of anyone presenting as a staff member of the IVCD may contact the Division via (868)-612-4823