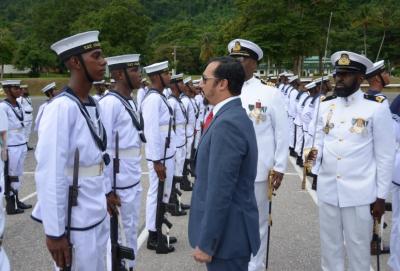 Minister of National Security the Honourable Stuart R. Young M.P. has reemphasized the Ministry of National Security’s commitment to work with the Trinidad and Tobago Coast Guard to ensure that the organization fulfills its responsibilities, stating that the Coast Guard has to use modern security equipment and technology in the execution of its important mandate.

The Minister gave this assurance on August 17, 2019, while delivering the feature address at the Passing Out Parade for the Trinidad and Tobago Coast Guard 55th Recruit Intake, held at Teteron Barracks in Chaguaramas.

The Minister congratulated the ninety-one (91) recruits on the successful completion of their induction training and welcomed them into the Trinidad and Tobago Coast Guard. He noted that the most valuable resource of any organization is its people and described the recruits as the Coast Guard’s key and crucial resource. The Minister urged the recruits to uphold their integrity in the execution of their duties and to be model officers of whom the country will be justly proud.

Minister Young took the opportunity to thank all the men and women of the Trinidad and Tobago Coast Guard for their dedicated and selfless service, in the protection of the nation’s borders, even in the face of recent unfair criticism and attacks. He also underscored that the Government of the Republic of Trinidad and Tobago continues to advance efforts in enhancing border security. Initiatives being pursued in this regard include the upgrade of this country’s Radar System; the procurement of two (2) Cape Class Vessels; the upgrade of facilities and infrastructure at the Coast Guard headquarters; and the refurbishment of fourteen (14) Coast Guard Interceptors which is expected to be completed in the coming weeks.

During the Passing Out Parade the Coast Guard recruits put on a drill display, demonstrating with precision, the tactics encompassed in their induction training.

Also present to congratulate the Coast Guard recruits at the Passing Out Parade were Permanent Secretary of the Ministry of National Security Mr. Vel Lewis and Acting Chief of Defence Staff Colonel Darnley Wyke.