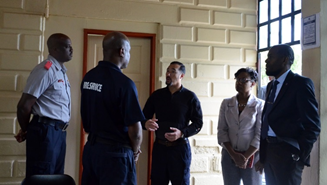 On his visit to the Santa Cruz Fire Station, Minister Young was able to join a meeting of the Senior Fire Officers of the Northern Division including, but not limited to, Officers in Charge of the following Fire Stations: Arima, San Juan, Morvant, Belmont, Santa Cruz, Chaguaramas and Four Roads. The Minister engaged in productive conversation with the fire officers to understand, first hand from them, what are some of the pressing issues facing the men and women in the Fire Service. It was a very frank and open conversation, with the Minister getting an opportunity to exchange thoughts with the officers. The officers promised to correspond with Minister Young for follow up action.

The Minister and Permanent Secretaries then toured the historic Woodbrook Fire Station, again obtaining a proper appreciation of the issues affecting the officers stationed there.

Minister Young and the Permanent Secretaries will be focusing on addressing as many of the issues raised by the Fire Officers as possible and intend to engage in further dialogue with the Fire Service.

Minister Young takes this opportunity to thank the men and women of the Trinidad and Tobago Fire Service for their commitment to service and assures them of the support of the Ministry of National Security and his personal support.